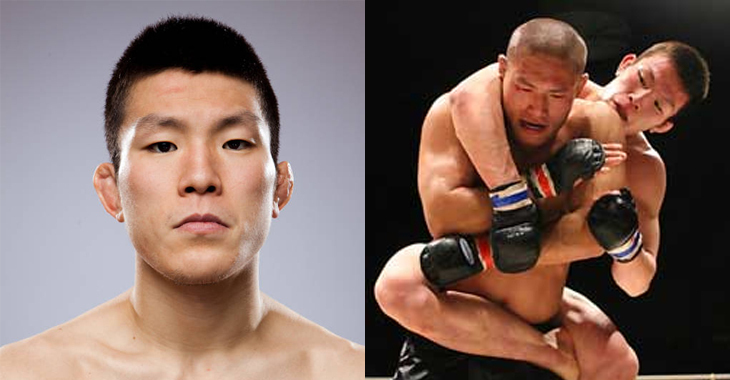 Known as one of the most effective grapplers in all of MMA, Japanese legend Shinya “Tobikan Judan” Aoki is a BJJ master. His incredible flexibility and unparalleled technical mastery has led to 39 victories in the cage. Including a whopping 25 wins by submission. Needless to say, once he gets guys to the ground, it’s only a matter of time before some sort of crazy submission happens.

Usually when opponents step into the cage with Aoki, they avoid going to the ground at all costs. It’s perhaps the only strategy that will work against Aoki. Aside from Demian Maia, Aoki is probably the most feared grappler in the entire sport.

Shinya Aoki is one of MMA’s most feared grapplers

Some of Aoki’s favorite submission moves include the face and neck crank, the Twister and the Gogoplata. All of these moves, he has successfully used in competition at some point in his career. To illustrate just how dangerous Aoki is on the mat, this video that Evolve Vacation shares with us today shows us three submissions from Aoki’s rubber guard. Who better to demonstrate these moves than Aoki himself?

Known as perhaps one of the most talented fighters to never step foot inside the Octagon, Aoki has seen it all. He owns wins over some of the biggest names in MMA including Eddie Alvarez, Kazushi Sakuraba, Tatsuya Kawajiri, Joachim Hansen, and Clay French.

A master of his craft, Aoki’s ground game is just utterly perplexing. And to show him in his element, this video perfectly captures his sense of perfection.

Just recently, Aoki figured in ONE Championship’s first ever Grappling Super-Match opposite American grappler Garry Tonon. Tonon, one of the baddest men in Brazilian Jiu-Jitsu right now, defeated Aoki via heel hook. Tonon is looking to make his MMA debut and get a rematch with Aoki under MMA rules. It should be an exciting contest.

Previously, Aoki also held the ONE Lightweight World Championship. He remained unbeaten and unchallenged for a few years before succumbing to Filipino fighter Eduard Folayang last November in a shocking upset.