Diego Sanchez may have parted ways with the UFC but that is not stopping his coach Joshua Fabia from creating some final drama.

The former TUF 1 winner, Sanchez (30-13 MMA), was slated to make his final Octagon appearance on May 8 against former training partner Donald ‘Cowboy’ Cerrone.

Unfortunately for fight fans, the highly anticipated welterweight bout was called off on Thursday, this after news surfaced that ‘The Nightmare’ had been released by the promotion.

“I have an incredible, amazing relationship with Diego and I like him very much and I hope he is OK,” White said. “One of the sad things that happens, not just in fighting but in sports, and I want you to quote me on this, are these creepy weirdos who come from God knows where and leech onto fighters or athletes. They never do any good for them.”

“Smoking Gun conversation with UFC Lawyer. Listen to it for yourself… None of this is normal fans, friends, family, fighters and casuals🙏🏼” – Sanchez captioned the post.

According to the post, the conversation took place on April 9 and included UFC matchmaker Sean Shelby as well as the promotions chief legal officer Hunter Campbell.

“The direct quote I received was, you stated that the quote ‘long-term effects of Diego being an MMA fighter’ were your basis for requesting it,” Campbell said to Fabia on the call (via MMAJunkie). “So I went through this with (former UFC fighter) Mark Hunt, and here’s the reality: If you’re concerned or (Sanchez is) concerned that he’s having negative effects, then we’re not going to fight him and I’m going to pull the fight right now and we’re going to call it a day and we’ll release him and he can go do something else with his life, because I’m not putting anybody in that cage that doesn’t feel 100 percent or thinks they’re suffering from any medical issues.”

Joshua Fabia then defended his previous request which had clearly raised red flags with UFC officials.

“Well, it has more to do with how is his physical body, and all the treatments that he’s had over 17 years of injuries in his hands, his face, and all over his body that I’m referring to,” Fabia said. “If he needs medical attention after his career, how is he supposed to move on without medical records? That’s what I’m concerned about. That’s all it is. If he has to go see another doctor about his hip or his back or any of these things, how is that doctor – why would we have to pay for new imaging, new everything, when it should be on file? I don’t understand what the problem is.” 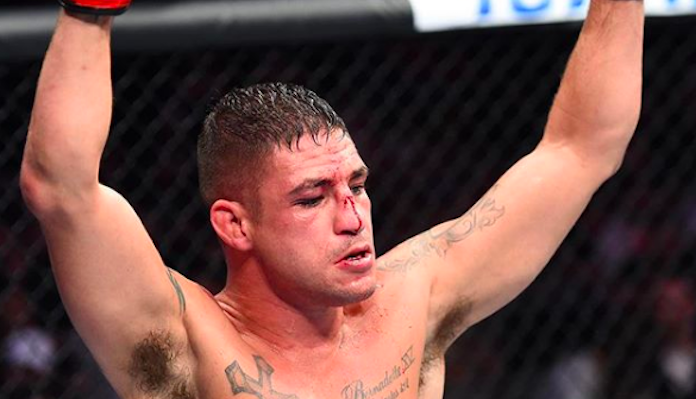 Hunter Campbell then replied with the following directions:

“Here’s what I’m going to do: I’m going to send an email to you guys,” Campbell said. “I’m going to express my concerns. I need a confirmation in writing that he’s physically able to compete, he’s not suffered any ill effects of being an MMA fighter, he doesn’t feel like he has any brain issues or cognitive issues. I’ve got to go through the whole battery that I do with everybody that sort of makes a claim that at least they’re telling me that you made in this situation. And if he’s not comfortable doing that, then we pull the fight and we move on. It’s very simple.

“… I can’t ever be in a situation where 10 years from now, I’ve got a guy that’s drooling on himself in a hospital, and I’ve got another guy saying, ‘Yeah, we told the UFC before his last fight that he was having all these issues and they put him in there anyway.’”

“We’ll jump through whatever hoops you need,” Fabia said. “Diego is 100 percent fine, as he is here with me right now. He’s fine, man. Everything’s good.”

What do you think of Joshua Fabia and Diego Sanchez releasing a private phone call they had with UFC officials Hunter Campbell and Sean Shelby? Share your thoughts in the comment section PENN Nation!