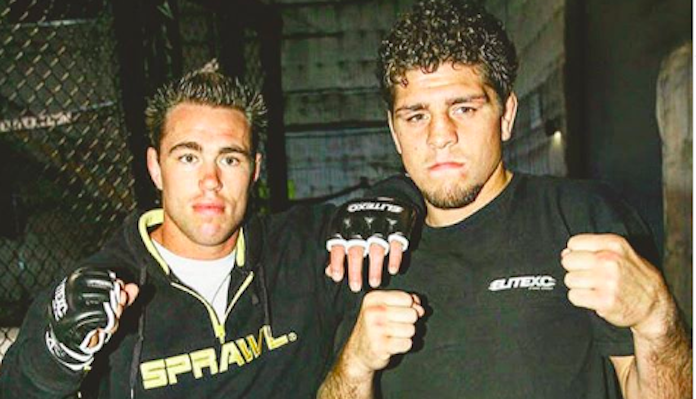 Jake Shields claims Nick Diaz was “pressured” into taking tonight’s UFC 266 rematch with Robbie Lawler “before he was ready”.

The MMA Icon, Diaz (26-10 MMA), returned to action from a six year hiatus this evening in hopes of defeating ‘Ruthless’ for a second time. The pair had originally collided seventeen years ago in a welterweight bout at UFC 47, with the Stockton native emerging victorious by way of second round knockout.

Tonight’s rematch proved to be a thrilling back and forth affair. The mixed martial arts legends treated fight fans to an absolute slugfest inside the Octagon. Nick Diaz appeared to get the better of Robbie Lawler in round one, but ‘Ruthless’ quickly turned the tide in his favor in round two. Then, in round three, Lawler connected with a punch that appeared to drop and injure the Stockton native. The bout was called off seconds later after Diaz opted not to get back to his feet.

Following the conclusion of the contest, Diaz spoke with UFC commentator Daniel Cormier where he offered the following cryptic words:

According to Diaz’s longtime friend and training partner Jake Shields, Diaz’s “had it coming” remarks were in relation to the fact that he was “pressured” into taking the UFC 266 rematch with Robbie Lawler.

Nick Diaz is a fucking legend

“Nick Diaz is a f*cking legend. 6 years off And six weeks to train and still makes fight of the night.”

Wanted to do a fight later but was pressured to take it before he was ready. People care about money not his health

“Wanted to do a fight later but was pressured to take it before he was ready. People care about money not his health.”

What do you think of Jake Shields suggesting that Nick Diaz was “pressured” into taking his rematch with Robbie Lawler at UFC 266?