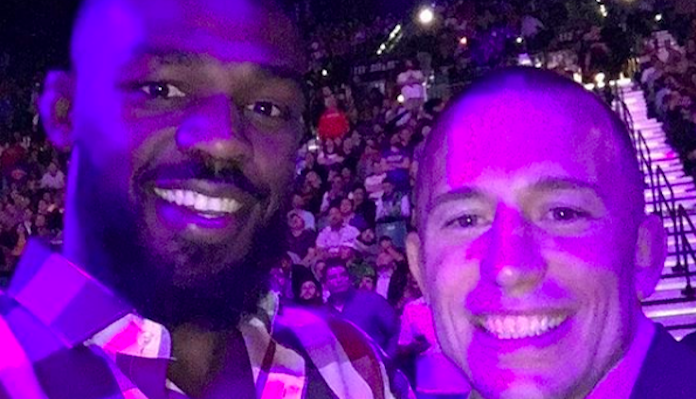 A potential fight between Francis Ngannou and Jon Jones has everyone excited these days. Including Georges St-Pierre who sees both fighters experiencing fear after talk of Jones being the “scared” one out of the two.

Immediately after Ngannou was crowned as the new UFC heavyweight champion of the world at UFC 260 on March 27, UFC President Dana White planted a seed in the post-fight press conference. Teasing the possibility of Jones being scared to fight a guy as impressive as Ngannou has become. St-Pierre recently countered that sentiment.

“Yes, Jon Jones is afraid of Francis, and Francis is afraid of Jon Jones because if they would not be afraid, that’s mean they don’t care,” St-Pierre said on The Joe Rogan Experience.

St-Pierre—one of the most successful MMA fighters of all time in and out of the Octagon—alluded to the price point for the heavyweight matchup which is the main roadblock.

As the former two-time UFC light heavyweight champion, Jones now feels he’s done fighting for anything less than his worth. Therefore leading to him stating that a $10 million payday would be too low for a fight that is the magnitude of one with “The Predator.”

Having fought everybody he could during his heyday, St-Pierre eventually attempted to capture a second divisional title of his own to close out his career. At UFC 217 in 2017 after a four-year hiatus, the Canadian icon did just that when he submitted middleweight champion Michael Bisping with a third-round rear-naked choke.

For Jones, his last fight came against Dominick Reyes at UFC 247 in February 2020. Jones would win via a controversial split decision.