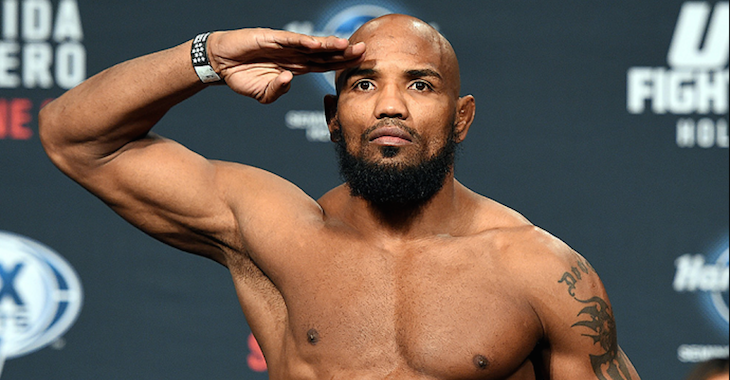 New York is proving to be a strict state when it comes to their athletic commission.

After delivering a fight-ending flying knee in the third round of their contest, Romero jumped over the cage celebrating his big win. The “Soldier of God” marched around the outside of the cage and then eventually walked back in the Octagon to be announced as the winner.

According to MMA Fighting’s report, “Exiting the fighting area before the bout is officially over is prohibited by the New York commission.”

Romero’s suspension will allow him to compete again on January 12, 2017, which likely does not hurt his chance of fighting for the UFC middleweight title next. The current middleweight champion, Michael Bisping has stated that he will be looking to fight Romero in spring 2017.

In addition to Romero being suspended, Thiago Alves and Kelvin Gastelum were also given suspensions for missing weight for UFC 205.

Alves was suspended for three months for missing weight by 6.6 pounds for his UFC lightweight debut against Jim Miller, first reported by ESPN’s Brett Okamoto. Alves was fined 20 percent of his fight purse, which went into Miller’s pocket for missing weight. Alves ended up losing a unanimous decision to Miller in their UFC 205 bout. Gastelum was suspended for six months for failing to appear at the early weigh-ins for his bout against Donald “Cowboy” Cerrone, also reported first by Okamoto. Gastelum is appealing his suspension.

Suspensions for missing weight are uncommon from most athletic commissions across the country. However, the New York State Athletic Commission obviously has made making weight for competition much more crucial by serving suspensions.