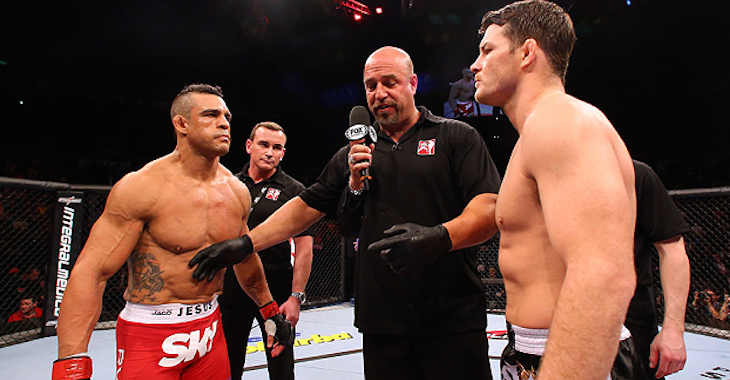 If things had gone according to the original plan, MMA legend Vitor Belfort would compete in the final fight of his illustrious MMA career this very evening, as he was scheduled to battle Uriah Hall in the co-main event of the UFC’s anticipated debut in St. Louis. Regrettably, Hall was hospitalized in the midst of his weight cut, which of course meant that Belfort’s retirement fight was put on ice.

Luckily, it seems that the Brazilian legend already has a new date for his retirement fight. According to a report from Combate, Belfort will battle Michael Bisping when the UFC touches down in London on March 17. The expectation is that this bout will also be Bisping’s retirement fight.

Belfort and Bisping have fought once before, back in January of 2013. On that night, Belfort flattened Bisping with a second-round head-kick.

Since then, Belfort has been hot and cold, defeating Luke Rockhold, Dan Henderson (twice), and most recently Nate Marquardt, and losing to Chris Weidman, Ronaldo “Jacare” Souza, Gegard Mousasi.

It is not yet known if this reported Belfort vs. Bisping rematch will headline the UFC’s return to London. Other highlights of this UFC London card include a light heavyweight rematch between Jimi Manuwa and Jan Blachowicz, and a lightweight bout between Rustam Khabilov and Kajan Johnson.

Who do you think comes out on top in this reported Michal Bisping vs. Vitor Belfort rematch at UFC London? Join the debate in the comments section!