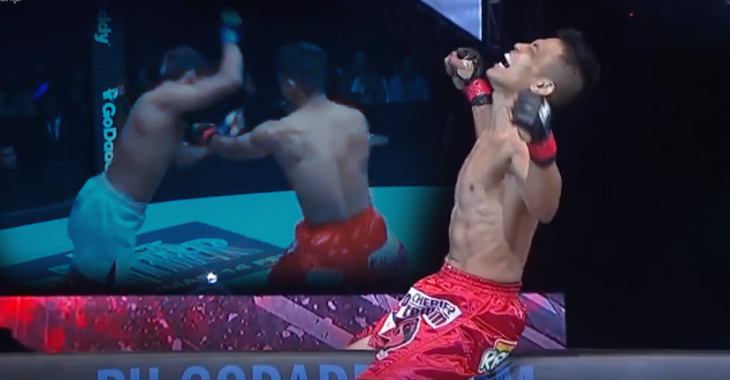 If you’re already itching for MMA and can’t wait until UFC Charlotte, ONE FC’s Global Superheroes went down last night provided enough excitement to hold you over until tomorrow even in just one fight. Featherweight Edward Kelly stepped in to face Meas Meulin the prelims and shocked everyone with his brutal and lightning fast knockout. The victory came at only 21-seconds, which is the fastest knockout in ONE’s featherweight division history. This KO of the Year contender is a highlight that deserves multiple looks.

It was a right hook that landed, a left hook that glanced off the elbow, followed up with a head kick that turned into a knee. Edward Kelly’s combo sent Meul off of his feet and faceplanting to the canvas. The spectacular knockout didn’t just break a record for quickness, but also ended Meul’s unbeaten streak. The Cambodian was riding a six-fight win record as a professional, which Kelly ended in under 30 seconds. Edward Kelly was respectful in victory, checking on his opponent to make sure he was okay, even seeming concerned about the damage due to the severity of the finish.

Eagle-eyed fight fans may get KO déjà vu by looking at this mid-flight altered head kick. Former WSOF bantamweight champion and current UFC fighter Marlon Moraes recently knocked out Aljamain Sterling in nearly the same fashion back at UFC Fresno to help close out last year. Could 2018 also be the Year of the Knee? We still have nearly 11 months to find out, but we’re off to a helluva start.