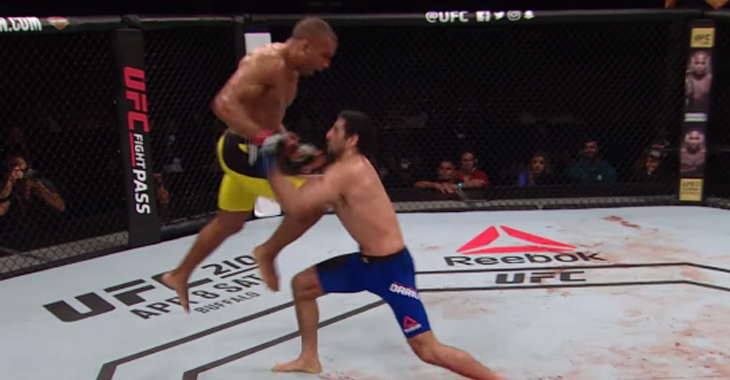 In just a couple of days, Khabib Nurmagomedov is scheduled to return against Edson Barboza at UFC 219. The last time we saw Barboza, he pulled off an incredible flying knee knockout over Beneil Dariush. It was so fast, it was like some sort of a violent reflex. It’s just one of the many highlight reel victories that the Brazilian has added to his resume. Something must have been in the water this year, because Edson Barboza wasn’t the only fighter putting knees to good use. Throughout 2017, dudes from organizations all over the world were letting those knees fly in every shape, form, flavor and style. Thanks to Caposa, he’s compiled the brutality all in one place.

With a sickening flying knee, Tywan Claxton made an emphatic arrival onto the MMA scene at #Bellator186. https://t.co/CiQ6J9ALCu pic.twitter.com/Mq7H1LerMC

Over in Bellator, Paul Daley and Tywan Claxton were competing to see who could pull off the most incredible knee knockout of the year. Skipping through the air, Daley landed a nice flying knee that took Brennan Ward out quick at Bellator 170. Not to be outdone, Claxton soared through the air like a super hero to knee Jonny Bonilla-Bowman at Bellator 186. He cleared nearly the entire cage, making it one of the best knees of this year, despite the very stiff competition.

From Japan to Russia, fighters were dropping left and right to these knees. No one was safe no matter what organization or what country they fought inside. Back in the U.S. though, Marlon Moraes just scored one off of Aljamain Sterling at UFC Fresno at the beginning of this month with a kick that turned into a knee. Still, after over two minutes of knee highlights, Edson Barboza’s still stands out for its velocity and for the quality of opponent he was able to pull it off on. If he can manage to land something like that on Nurmagomedov as he shoots in, the crowd would to explode.