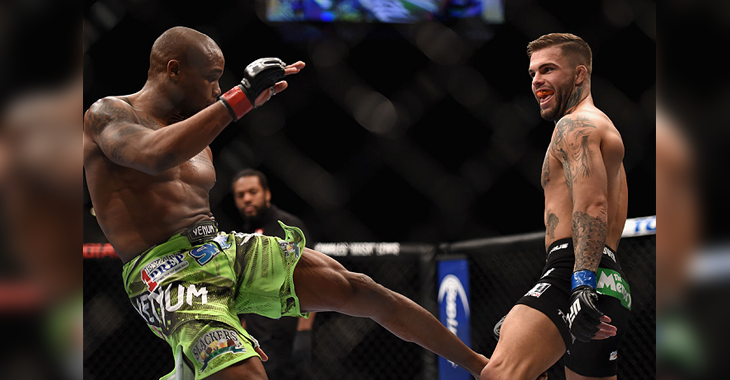 Cody Garbrandt has done what most UFC fighters can only dream of. “No Love” impressively made his debut in the UFC and became a UFC champion in less than two years.

On this day in 2015, Garbrandt entered the Octagon for the first time and faced Marcus Brimage at UFC 182. “No Love” put on a memorable performance in his debut, putting away Brimage in the third round by TKO.

#OnThisDay in 2015: New champ @Cody_Nolove made his UFC debut! What an incredible 2yrs it's been!

The power of self-belief came all too real as Garbrandt recently stated on The Luke Thomas Show that he had set a goal for himself to become a UFC champion by 2017. “No Love” did just that with just one day to spare as he took the belt from Dominick Cruz on December 30 at UFC 207 in Las Vegas, Nevada.

“I think I should be Fighter of the Year,” Garbrandt stated prior to UFC 207 taking place. “I go from unranked to world champion in one year. Before I got in the UFC, I wrote down on a piece of paper a goal that I was going to make it to the UFC in 2015 and then I’ll be the world champion before 2017 so I’m right on track. I pull out that piece of paper all the time and look at it. It’s motivation.”

Much like UFC lightweight champion Conor McGregor had set his goal of becoming a two-weight UFC champion when he first entered the Octagon, these two UFC title holders turned their dreams into reality.

Garbrandt was actually able to become a UFC champion in a quicker time span than McGregor. Garbrandt secured his first title just a few days short of two years fighting in the UFC while McGregor took a little over two years and three months to secure the interim featherweight title from Chad Mendes at UFC 189.

Oddly enough, another similarity between McGregor and Garbrandt is that both of them made their debut against the same opponent, Marcus Brimage.

What do you think is next for Cody Garbrandt in his young career? Let us know who you would like to see “No Love” matched up with next!