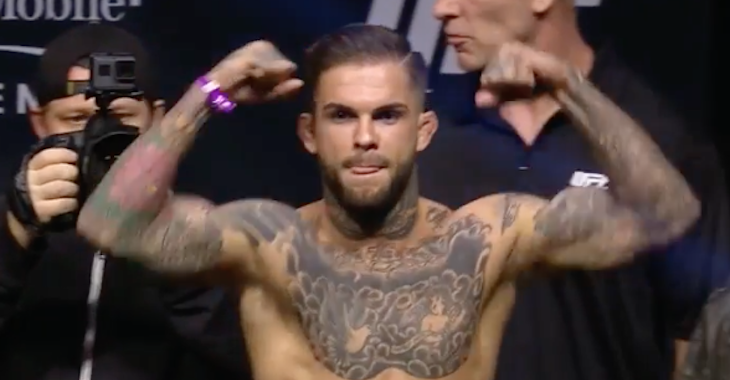 To close out 2016, undefeated Team Alpha Male prospect Cody Garbrandt put on the performance of a lifetime as he not only defeated former bantamweight kingpin Dominick Cruz, but picked ‘The Dominator’ apart over the course of five rounds, even rocking Cruz several times throughout the fight.

Leading up to the fight, Garbrandt stated several times that he would be happy to give Cruz a rematch when he emerged from UFC 207 victorious. In addition however, leading up to UFC 207, Garbrandt and former teammate TJ Dillashaw exchanged barbs. With both men emerging from their respective UFC 207 fights victorious, many believe the stage had been set for a fight between the two former teammates.

Following the fight, Garbrandt welcomed not only a rematch with Cruz, but also a fight with Dillashaw, as well as a superfight with featherweight champion Jose Aldo.

“I watched T.J.’s fight a couple of times, and it’s kind of up to Cody. He’s the champion. He just dominated the guy who has a win over T.J. in his last outing, has a win over Urijah (Faber, now retired), who’s been on top for the last 10 years.

“And I would like to see Cruz back in there. But the T.J. fight, everyone’s saying that he deserves the shot, and that’s fine with me too. Because I can tell you what would happen in that fight, but I’m not ready to tell you yet.”

In regards to his role at UFC 207, Buchholz explained how Garbrandt’s performance made his job an easy one during the fight:

“I cornered a lot in the UFC – a couple of world title fights and whatnot,” Buchholz said. “But this was the first time cornering where I seriously just kind of sat back and enjoyed the show, and I was like, ‘Yeah, man!’ I’ve never actually heckled the opponent, and at that point, me and Danny (Castillo) start yelling at Cruz.

“Because Cody was so focused, so in the zone, he was just like Michelangelo out there. He was just improving and hitting a lot of moves we had worked on perfectly. It was seriously a masterclass performance.”