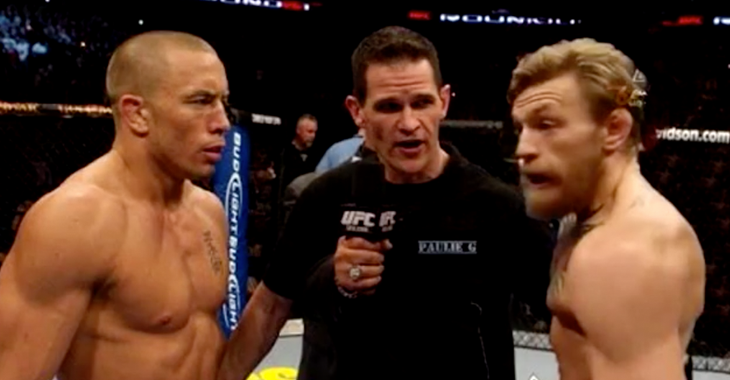 Now that former UFC welterweight champion Georges St-Pierre and the UFC have come to an agreement for “Rush” to compete in the Octagon once again, many are anxiously waiting to hear who will be named as an opponent.

Jon Anik and Kenny Florian brought up the potential superfight between current UFC lightweight champion Conor McGregor and St-Pierre on their Anik and Florian podcast. Both of the UFC analysts and commentators believe that matchup would be the biggest fight the UFC could make at this point.

“So again, they have options right,” Anik continued. “Those guys can carry pay-per-views on their own. We used to say that Cyborg-Rousey was the biggest fight we could make in the UFC. Is the biggest fight that we can make right now at present, not Georges St-Pierre versus Conor McGregor?”

'Conor McGregor vs GSP would be the biggest fight in UFC History – Would Do 2+ M PPV Buys' – Via the Anik & Flo podcast pic.twitter.com/kkmD0rDEin

“Without a doubt,” Florian replied. “That’s the biggest fight in UFC history right there. You look at Georges St-Pierre and what he brings to the table – he was pretty consistent at about one million pay-per-view buys is what I was hearing, and we know what Conor McGregor is bringing in. He’s past that right now. Imagine a 2 million buy pay-per-view in the UFC between those two. I think that’s a very realistic thing. And, with the way the UFC has been doing things, they haven’t been waiting around. They have been trying to go for the big game kill right away. They been trying to put together the biggest fights they can, as quickly as possible. That might be the fight. That’s a really interesting fight, I would love to see it.”

How would the style matchup between Conor McGregor and Georges St-Pierre go in the Octagon? Let’s head to the comment section for this one!