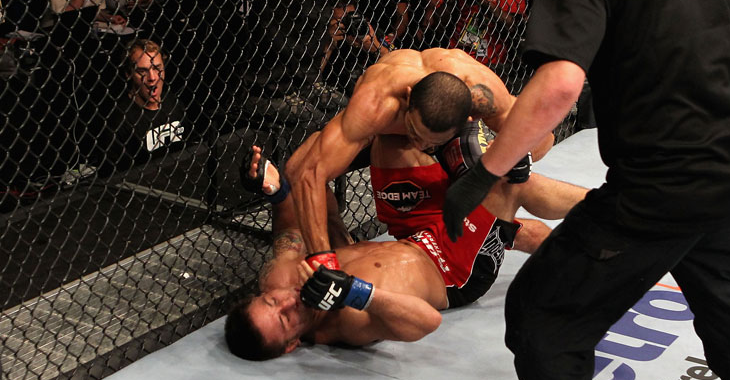 UFC interim featherweight champion Max Holloway is set to unify the UFC featherweight titles on June 3 against the undisputed champion Jose Aldo in Brazil at UFC 212. Coming off the biggest win of his career against former UFC lightweight champion Anthony Pettis in their interim title fight, Holloway will look to step it up in in what is now the biggest fight of his career as he looks to become the undisputed champ.

“There’s no surprise what Max wants to do, what I want to do,” Holloway told Ariel Helwani on Monday’s episode of The MMA Hour (transcribed by MMA Mania). “I go in there I strike, I strike and I strike some more. Every time I fight a striker, everyone always says Max’s striking is not as good as this guy’s striking.

“When I fought Anthony Pettis, the same thing with Cub, and whatever. I tell you guys now, I’ve been making these strikers turn into wrestlers for a while now, and I wouldn’t be surprised if Jose tries to do this against me come June 3rd.”

Holloway says that he will have some new weapons in his aresenal for his bout with Aldo with the help of his team and coaches.

“I’m going to go in there and do what we do best. I got some of the best coaches in the world, some of the best gameplans. Every single damn fight, you see me raise the level, and that’s what I am going to do, raise the bar against Jose and you guys will find out. It’s going to be fun, I got some secrets up our sleeve I cant tell, but tune in to the pay-per-view June 3rd, you guys are going to watch something amazing.”

How do you see the UFC featherweight title unification bout between Jose Aldo and Max Holloway going? Give us your prediction on how and when the fight ends in the comment section!