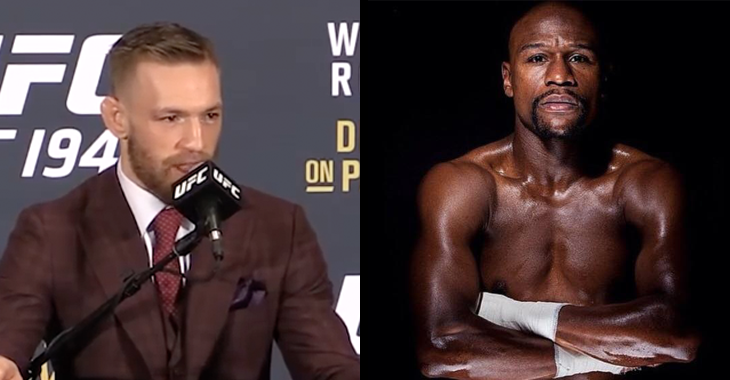 UFC President Dana White has said time and time again that if Floyd Mayweather and Conor McGregor want to fight, he is the man to talk to.

With “The Notorious” being under contract with the UFC, it seems like it would be the only way unless McGregor were to fulfill the terms for the remainder of his current contract.

However, one man seems to think otherwise, and that is Conor McGregor himself.

Speaking at his pay-per-view interview with Ariel Helwani on Saturday, McGregor said that he now only has one fight on his mind and it doesn’t involve any fighter on the UFC roster.

“I have my eyes on one thing, and that’s Floyd Mayweather,” McGregor said (transcribed by The Mac Life). “Me and Floyd have got together and figure it out the same way him and Manny [Pacquiao] figured it out. Once we come to a set number that I’m happy with, he’s happy with, then we go to the customers, we go to the promoters, the buyers. And then we get it done.

McGregor went on to explain why he believes that a fight with Mayweather will happen with or without the UFC. “With the Ali act, I believe I can [get the fight done] especially now there is offers on the table. But it’s smoother with all involved. I think we’re all about good business. I’ve done great business with the UFC, with Dana, with everyone. I think it’s smoother if everyone just gets together and gets involved. But again, everyone’s got to know their place, so we’ll cross that bridge when we come to it.

With “The Notorious” now seeming to be in the diver’s seat of his own career, the current UFC lightweight champion gave his timeline for the showdown with the undefeated boxing legend.

“I believe it will happen by the end of this year, or early next year,” McGregor stated.

Do you think that the “Ali Act” will allow a boxing match between Floyd Mayweather and Conor McGregor to take place with or without the UFC? Let’s hear your thoughts in the comment section.