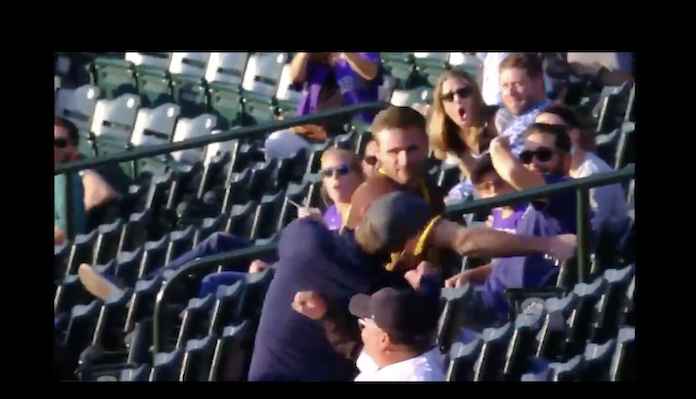 A San Diego Padres fan landed a vicious right hand that knocked out a Colorado Rockies supporter at a baseball game on Wednesday night.

Apparently, a verbal argument between two fans turned violent, and it saw a Padres fan land a right hand out of hell that knocked the Rockies fan out almost instantly. As soon as the Rockies fan was knocked out, there was a brawl that ensued among the fans.

Take a look at the knockout below (Via Jomboy Media).

Padres fan knocks a Rockies fan out cold and gets mobbed by Rockies fans pic.twitter.com/8E1b6STR3R

Who getting KO’d like this on Saturday? #UFC262 pic.twitter.com/60eEJmOVY9

The incident took place at Coors Field in Denver, Colorado. As reported by TMZ Sports, the Denver Police Department provided a comment on the incident, saying that the man who was knocked out refused to press charges. The Rockies ended up winning the game in the eighth inning of the doubleheader off of a walk-off single by infielder Josh Fuentes.

“The person who threw the first punch, was contacted by police. However, the person struck did not want to press charges,” the Denver police said in a statement.

It’s unknown what exactly led to the confrontation between the Padres and Rockies fan, but it ended with the Rockies fan finding himself falling down flat on his face. After getting the knockout, a brawl ensued, though it seems like no one was seriously injured in the melee.

It’s always interesting to see these kinds of scrums happen in crowds at sporting arenas. With most of the sporting world being stuck in the COVID-19 pandemic for the past year-plus, there haven’t been as many instances of these sorts of scrums in a while now. With people now back at arenas, we will likely be treated to more of these sorts of public brawls as fans are back to watching their favorite sports and the alcohol is flowing.