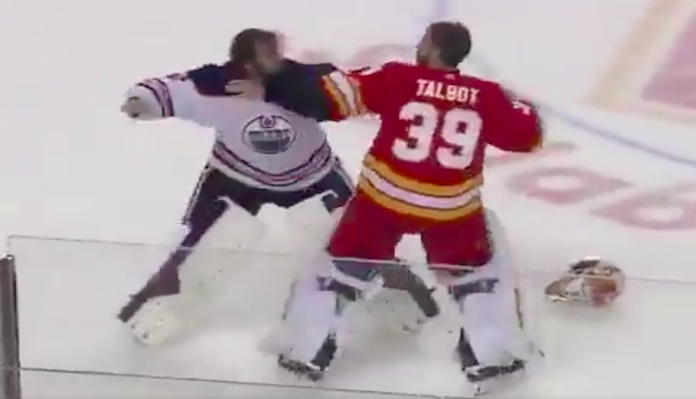 Members of the Edmonton Oilers and the Calgary Flames National Hockey League teams got into an epic line brawl on Saturday night.

The Oilers and Flames have been bitter rivals for decades and nothing is any different in 2020. During the regular-season game between the two on Saturday night, which took place at Scotiabank Saddledome in Calgary, Alberta, things got extremely heated between the two members of the NHL’s Pacific Division.

Near the end of the second period, a massive line brawl erupted between the five players on the ice for both teams — plus the goalies. In the NHL’s first goalie fight since 2013, the Oilers’ Mike Smith fought the Flames’ Cam Talbot in a rare standoff between goaltenders.

Check out the Oilers vs. Flames fight below courtesy of SiriusXM NHL Network Radio.

Woah. The Battle of Alberta is on another level tonight. #BattleOfAlberta #LetsGoOilers #Flames pic.twitter.com/35S4oq6y77

“Woah. The Battle of Alberta is on another level tonight. #BattleOfAlberta #LetsGoOilers #Flames”

As soon as the Oilers and Flames finished their fight, the internet exploded, with fans all over commenting on how this line brawl brought back memories of the NHL’s past glories. Fighting is not as common in the NHL as it once was, so for such a massive fight to occur, especially one involving goalies, is rare at this point.

Having said that, maybe this is just what the doctor ordered for the NHL. The clip of the Oilers’ and Flames’ players fighting each other has gone viral over the internet, so much so that even MMA websites like BJPenn.com have taken notice. This was a quality fight featuring top-level athletes, and we tip our hat to all the combatants involved for their performances.

All-in-all, 102 penalty minutes were handed out during one of the NHL’s most exciting line brawls in years. The Oilers ended up winning the game by a score of 8-3.

Is this the greatest NHL goalie fight you’ve ever seen?