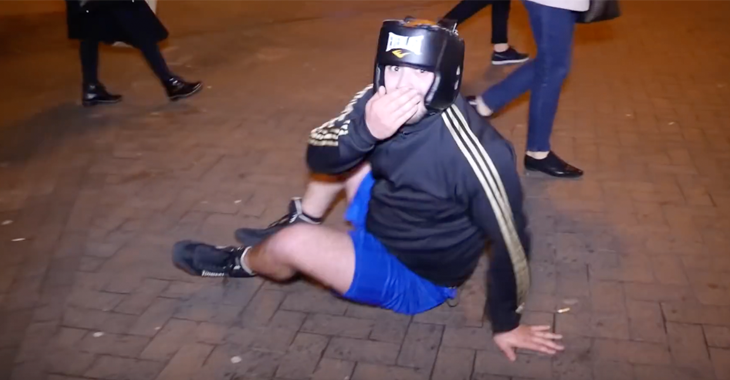 There are so many entertaining videos on the Internet that can bring some laughter to your day.

Here, we take a look at YouTube comedian Goubran Bahou who with the help of his filmmaker Alex Balcombe bring you “comedy sketches, pranks and reaction videos.”

In this video, Bahou gets out into the streets to test his defense against some citizens walking by and some who have even had a few drinks.

Bahou said at the beginning of his video, “If you remember, David Haye whacked me in the stomach. Lucky Shot.” The video got a share from none other than Mike Tyson and Bahou decided why not have another go at a boxing video.

“I’m going to ask members of the public to whack me in the face,” Bahou said leading into his first encounter as he was set to take the challenge on without hitting any of the challengers back.

Bahou goes through a few of the people on the street, some having a bit more success than others. A girl steps up to the challenge and clips Bahou with a couple shots to the face and then actually gives an apology with a kiss. In one of the funnier moments of the video, Bahou uses his footwork to dodge a drunk challenger who actually falls down on his back. The crowd around erupts with cheer and laughter as Bahou struts around and celebrates as if he just won a championship title fight.

Things take a turn when one of the challengers says that he actually wants to fight. Bahou shows some offense and puts this challenger on his bottom a couple of times. Check out the full video and have a good laugh!

Do you think you could have done better than any of the guys or girls in the video? Sound off in the comments if you feel like you could catch Goubran Bahou with a pair of gloves on!