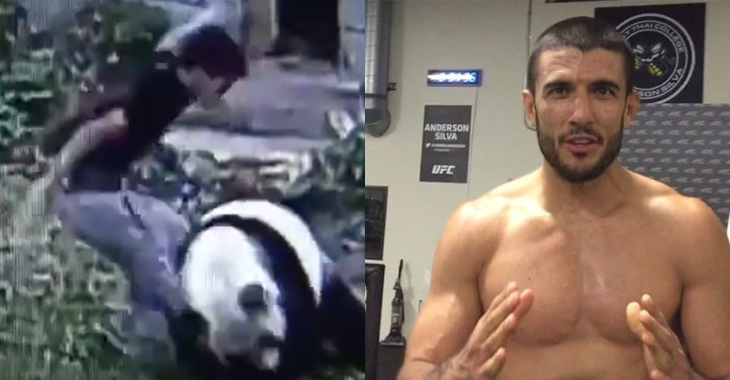 Brothers Rener and Ryron Gracie bring their detailed breakdowns of many mixed martial arts fights that give viewers true insight as to what happened in the contest and more importantly why things happened the way they did.

MAN vs. PANDA (Gracie Breakdown) Chinese man breaks into panda enclosure to impress his girlfriend. What happens next is some of the most beautiful zoo-jitsu ever documented! Leave a comment with the most valuable lesson from this breakdown!

In this humorous video from Rener, the Gracie black belt gives his classic “zoo-jitsu” breakdown of the recent viral video of a man breaking into a panda bear zoo exhibit.

“Boom. Bite with the teeth, grab with the paws,” Rener says in the video as the Panda grabs the man in the exhibit. “The man thinks it’s no big deal, it’s a small panda right? So he’ll just wiggle his leg out whenever he gets a chance. Wrong. “The panda keeps the pressure, controls the ankle. As the man turns to face him to pull his leg out, watch the most incredible control of the ankle and watch the pressure on the shin area causing the Chinese man to lose his balance and then normally at this point, most pandas let go of the leg. But this panda kept control. He jumped across the body. The man pushes his head. The panda uses that opportunity to establish side control on the opposite side. The man does not train jiu-jitsu so he’s not gonna be able to shrimp to guard. The panda maintains beautiful control. Most people lose control at this point. He goes for the pet the neck technique. The panda has seen that one before, does not let go, keeps the pressure leaving the man no choice but to turn his back. If the panda had done the triple threat mastery seminar, the man would be in deep trouble at this point but the panda hadn’t done the seminar!

“The man is able to scramble little by little. He’ll find himself building the house at this point, gets back to his knees. The panda makes the devastating error of pulling half guard you guys. If we know one thing about zoo-jitsu, do not pull half guard! It simply hasn’t been proven. A couple palm strikes and the Chinese man gets away. “The bottom line is, don’t be an idiot. Don’t jump into panda enclosures. More importantly, impress your girlfriend the old fashioned way and learn Gracie jiu-jitsu at gracieuniversity.com”

Of course, this was all done in fun by Rener Gracie but surely puts the video into a new light with some wildly fun breakdowns of “zoo-jitsu.”