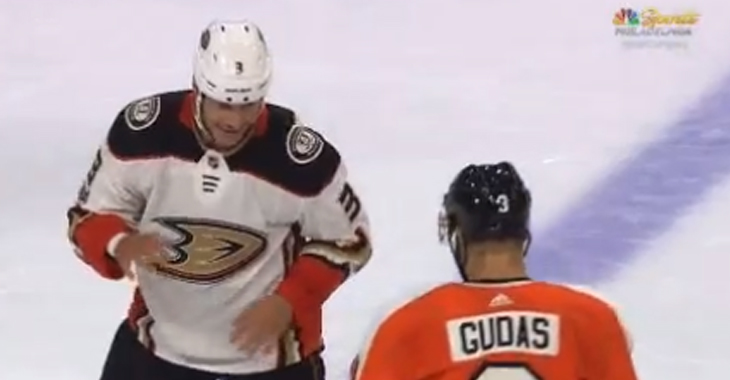 If for some reason you didn’t get your fill of MMA from UFC’s Saturday afternoon fight card, you can always tune into hockey. We’re not going to pretend to be experts on the sport, but they do have some icy slobberknockers that occur with regularity. It’s rare however, to see one unfold quite like this one between Kevin Bieksa and Radko Gudas. The two squared up and Bieksa launched a superman punch straight to Gudas’ jaw, dropping him with a quickness. Has he been training at TriStar in between games and practice?

Uh, was that a Superman punch or….? pic.twitter.com/TxA0BbXAy3

Look at that technique, the way he kicks his leg back, the way he swats away the right hand of his target. Not to mention, Kevin Bieksa is on ice skates! As of the time of this article, the Anaheim Ducks were leading the Philly Flyers four-to-one. If you ask us though, they already took their ‘L’ in the form of that picture perfect punch. Dana White needs to look through his Rolodex to see if he has any contacts from the NHL. Six months of sprawl training and we could have a new star in the UFC.