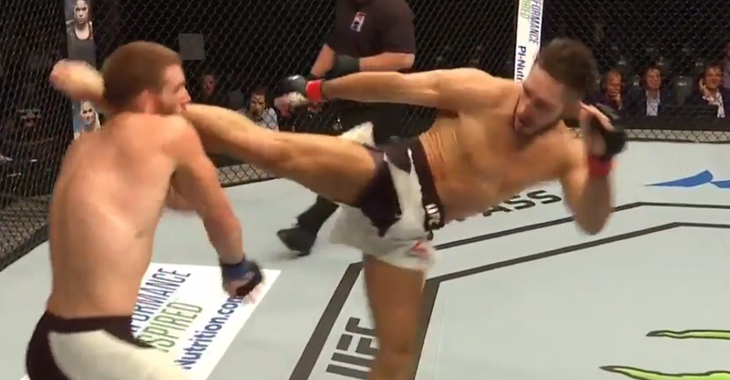 It’s Labor Day weekend and someone must have clued the UFC matchmakers in on it. Instead of forcing people to cancel their social obligations on Saturday night, we were delivered UFC Rotterdam  just before lunch (11:45AM on the East coast) or right during breakfast (8:45AM PT). So, whether you’re nursing a hangover with some greasy sausage for brunch, or pouring a big salad bowl full of cereal, there’s a UFC card going on. The action didn’t wait for early viewers to wipe the crust out of their eyes either, Thibault Gouti took it to Andrew Holbrook and finished him in a single round.

Look at that kick! You can see Holbrook grab Gouti’s foot as the bout is already being called off, surely a good strategy if you don’t want to get kicked again. Pro tip: Your opponent can’t kick you while you have his leg nestled in your arms like a football. Well, at least not with the same foot. Holbrook was threatening with takedowns early as the two duked it out, but it was that picture-perfect kick that spelled the end for the UFC lightweight.

Thibault Gouti needed this win badly, coming off of three straight losses. Not only did he succeed, but he couldn’t have opened UFC Fight Night 115 better. Most of the time, don’t ask how, but if a card opens with a banger like that then the rest of the card gets pretty exciting. UFC Rotterdam is on UFC Fight Pass LIVE right now.