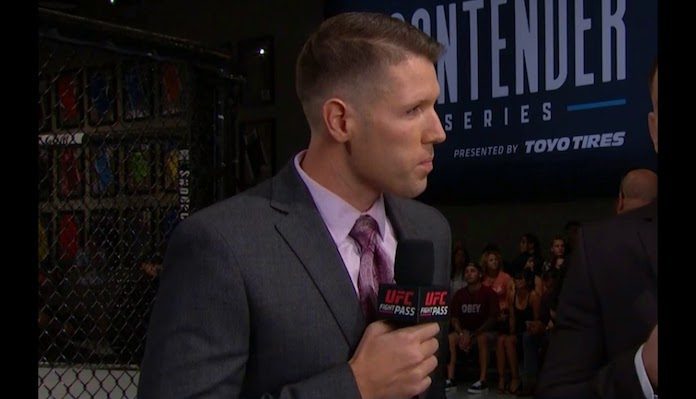 A video has circulated of UFC commentator Brendan Fitzgerald hiding under the announcers’ desk following the main event of UFC Mexico City.

The main event was declared a No Contest after just 15 seconds when Jeremy Stephens was unable to see following an accidental eye poke by Yair Rodriguez. The unfortunate ending to the card left fans in the arena extremely upset, with many of them chucking beer and popcorn into the center of the Octagon and at the fighters.

During the melee, Fitzgerald hid under the commentary table, and UFC analyst Michael Bisping was able to capture video footage of him hiding while he called play-by-play of the ruckus. Watch the video below.

LMFAO! Brendan Fitzgerald hiding under the desk from the Mexican fans is too much😂😂😂 #UFCMexico pic.twitter.com/rzQKh1VxIO

The fans had every right to be upset that the main event finished just 15 seconds with no winner or loser. However, they had no right to throw things into the Octagon, which put the fighters at risk of being injured, not to mention the commentators. Despite that, it at least made for a memorable video taken here by Bisping of Fitzgerald hiding.

Now that the fight is over, Stephens has already called out Rodriguez for insinuating he was faking the injury, telling him “let’s run it back motherf*cker” once his eye heals up. For his part, Rodriguez said that he’s open to whatever the UFC wants, but also mentioned that his goal is to move up in the rankings not backwards, and he isn’t sure if fighting Stephens again is the right move based on the fact Stephens is behind him in the rankings.

Considering how the fight ended and how much fans were looking forward to it, it does seem like the UFC would be interested in booking an immediate rematch, but at this point it’s wait-and-see.

What did you think of fans throwing debris into the Octagon following the UFC Mexico City main event?