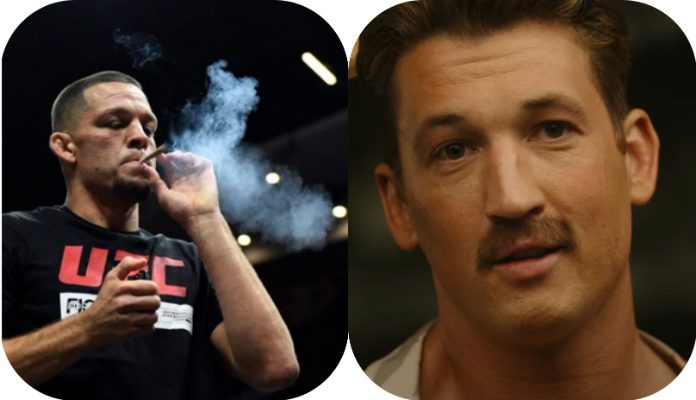 Nate Diaz was in attendance at UFC 276 on July 2, 2022 which took place at the T-Mobile Arena in Las Vegas and marked the UFC’s pay-per-view event for International Fight Week.

The promotion had Israel Adesanya (23-1 MMA) meeting up with Jarred Cannonnier (15-6 MMA) in the middleweight main event. Adesanya won a unanimous decision victory over Cannonier, retaining his middleweight world championship. It was to be his fifth title defence.

Alexander Volkanovski (25-1 MMA) got in the cage with Max Holloway (23-7 MMA) in the co-main featherweight match-up. It was to be the third meeting for the 2 fighters and the outcome was a third win for Volkanovski, who previously beat Holloway at UFC 251 and UFC 245.

A fan favorite, Nate Diaz, although not fighting, was in attendance at UFC 276 and drew a lot of attention outside the cage.

Miles Teller, an actor who played jazz drummer Andrew Neiman in the movie Whiplash and most recently played Lt. Bradley ‘Rooster’ Bradshaw in the recently released movie ‘Top Gun: Maverick’, was one of the fans elated to meet Nate Diaz.

Meeting in the crowds at UFC 276,  Miles Teller and Nate Diaz could be seen in conversation and it was all smiles. Although difficult to hear the exchange, Teller was obviously impressed to be meeting the MMA fighter Diaz, and Diaz could be heard commenting on how nice it was to meet the 35 year old actor. Check out the footage below (6 minutes in):

Who would you like to see Diaz get in the cage with next?