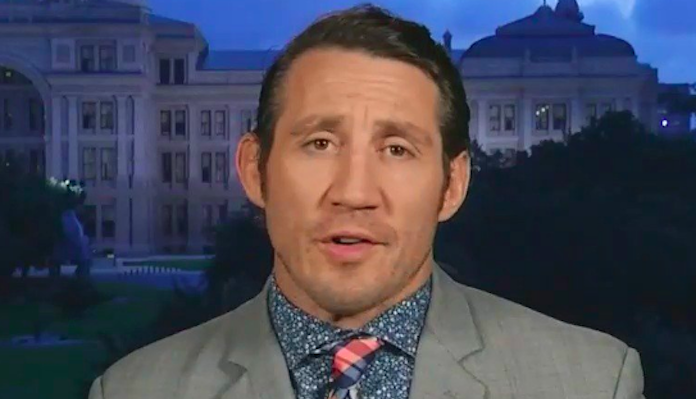 After a tragic weekend of senseless violence in the United States, UFC and Strikeforce veteran Tim Kennedy appeared on FOX & Friends to give his take on the gun debate in the country.

Kennedy shared his belief that, more than anything, there is not enough masculinity in America.

See what he had to say below, via Bobby Lewis on Twitter.

On Fox & Friends, a former UFC fighter & military sniper says mass shootings happen because "there's not enough masculinity" in America, and we're "stunting" boys' ability to protect the rest of us by telling them to avoid danger & take ADHD meds: "You have to let boys be boys." pic.twitter.com/CEsDAOjZHx

“There is not enough masculinity,” Tim Kennedy told the hosts of the show (transcript via MMA Mania) “What we are doing to our boys now is stunting them. We are built, hard-wired to do incredible things — protect is one of them. When you take a boy in school and say you can’t act this way, can’t be energetic this way, can’t explore and shouldn’t do dangerous things, you are messing with the hardwire in their brains.

“Everyone is made different, but men have to be men,” he continued. “And boys grow up to be men. You have to allow them to do that. When you don’t and give them ADHD medications, tell them that they can’t go climb a tree or be busy in a classroom, these are the results. You have to let boys be boys.”

Tim Kennedy continued, offering a number of other takes on these polarizing topics. See the highlights in the thread below:

Fox guest: "I loved an era where if you called a president a racist, a bigot, a coward, you would be at the end of a duel." He denies calling for violence, but says "there should be consequences for your words." pic.twitter.com/8pD0wAfDL1

Tim Kennedy has not fought since December of 2016, when he was stopped by Kelvin Gastelum. In his next most recent fight, he was knocked out by Yoel Romero in a controversy-ridden fight. After these losses, he retired from competition. The former Strikeforce middleweight champ hung up the gloves with a 18-6 overall record in mixed martial arts, and wins over top-flight foes like Michael Bisping, Rafael Natal, Roger Gracie, Robbie Lawler, Melvin Manhoef, Zak Cummings, and Jason “Mayhem” Miller.

What do you think of these comments from Kennedy?