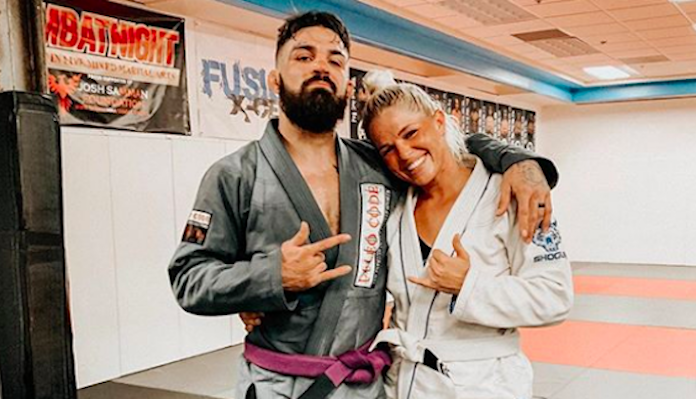 Colby Covington has had plenty to say about “Platinum” Mike Perry and his wife Danielle over the years, and the pair recently returned fire from a swimming pool in Montevideo, Uruguay.

In a video posted to Instagram, Perry and his wife “reenacted” Covington’s recent victory over Robbie Lawler, accusing the former interim champion of having “pool noodle punches.”

“I’m going to show you how a real man punches mañana,” Perry said toward the end of the video, referencing his imminent, UFC Uruguay showdown with Vicente Luque (learn how to watch here).

While there has always been plenty of animosity between Mike Perry and Colby Covington, the pair have yet to share the cage thanks to their differing stations in the welterweight rankings.

That being said, Covington recently proclaimed that — if he swipes the welterweight title from Kamaru Usman later this year — he’ll grant Perry a title shot. This offer only has one condition: Perry needs to win to fights in a row.

Perry won his last fight, defeating Alex Oliveira in a wild brawl. That means that, if Covington is a man of his word — which he often claims to be — he may just angle for a fight with Perry if he defeats Luque this weekend.

“If Mike Perry can win two fights in a row he’s getting an immediate title shot,” Colby Covington told host Jason Kindschy on BJPenn.com Radio. “I will defend my title against him. I know he can’t count to as high as two and I know he’s probably not going to win two fights row. If Mike Perry, that dumb motherf**king cousin f**ker, sheep lover, horse-face lover motherf**ker can win two fights in a row, Jason, he’s getting an immediate title shot. Winning two fights for a jobber who’s going to be fighting Indian casinos next year is going to be really tough for him. I don’t see it happening, but I wish him the best. I really do hope he wins another fight so I can literally break his jaw and send him packing. He’ll never fight again. I promise you that.”

What do you think of this video from Danielle and Mike Perry? Do you think they’ll get a response from Colby Covington?