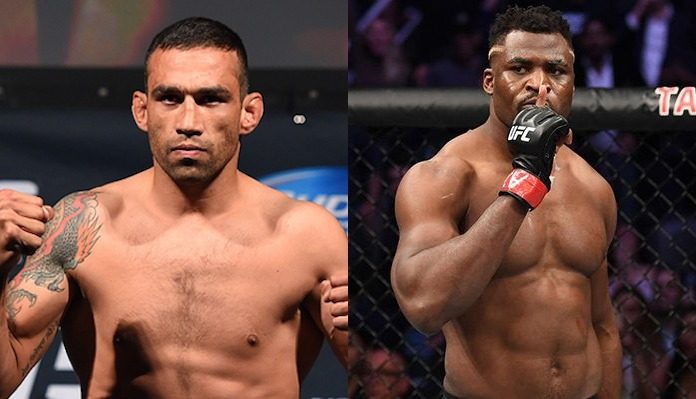 Fabricio Werdum is currently sidelined due to a USADA suspension but he has his eyes set on his return fight.

During his suspension, he asked for his release, yet the UFC never obliged. Now, he is set to return in May of 2020 and when he does, he wants to fight Francis Ngannou.

“The big guy, Francis Ngannou. He is a huge guy, a very strong guy. But, I visualize the fight with him and I saw when I finish him. I do this a lot, I visualize all my fights,” Werdum said to Sherdog.com. “When I fought Cain Velasquez, remember when I won the belt? I visualized everything. I would go to Mexico, stay there for two months. And become very focused. I like the fight against Francis Ngannou. A big challenge for me, I know he is strong, but I believe I finish him on the ground.”

Currently, Ngannou is on a three-fight winning streak with TKO wins over Curtis Blaydes, Cain Velasquez, and Junior dos Santos. There, he finished all three in the first round and only ‘JDS’ lasted more than a minute. He is currently ranked second in the division and has stated he wants to fight the winner of Daniel Cormier-Stipe Miocic next.

Werdum, meanwhile, in his last fight back in March of 2018 was knocked out by Alexander Volkov in the fourth round.

The 42-year-old is a legend of the sport and has stated he wants to continue to fight when his suspension is up and has now thrown out Ngannou’s name. Whether or not he gets that fight is to be seen. But it would be interesting given the fact that Werdum would look to get the fight to the ground while Ngannou would want it to remain on the feet.

If Fabricio Werdum and Francis Ngannou were to fight, who do you think would win? Sound off in the comment section, PENN Nation!