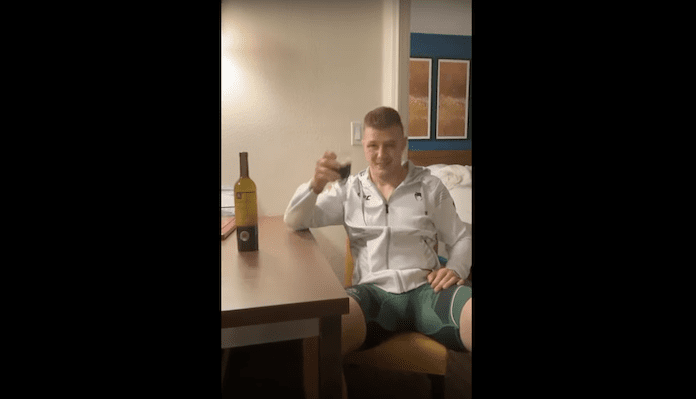 Vettori won a hard-fought unanimous decision over Costa in the main event of UFC Vegas 41 on Saturday night. The fight was originally intended to take place at 185lbs, but after Costa showed up to fight week heavy and off weight, the promotion had no choice but to shift the fight up to the 205lbs division. It’s possible that since both men didn’t have to cut as much weight that their durability was increased in the fight, which helped it go the full five rounds. Either way, Vettori got the win and Costa got the loss. Even though it was at 205lbs, Vettori still figures to make a move in the middleweight rankings with the win.

Following his big win over Costa, Vettori took to his social media to post a video of him celebrating his victory. In the video, Vettori is seen drinking a bottle of wine in a clear attempt to troll Costa, who infamously got drunk off wine the night before he had his UFC middleweight title shot against champion Israel Adesanya at UFC 253, which he lost.

“Heres some way from my beautiful hometown of Mezzocorona. I was going to give it to Costa but f*ck him! He doesn’t deserve it. I’m going to drink it myself,” Vettori said in the video.

With the win, Vettori has now won six of his last seven fights overall. He is clearly one of the best fighters in his weight class, but he has lost to the champ twice already, so it seems unlikely he will be getting another title shot anytime soon. As for Costa, UFC president Dana White said that he will have to fight exclusively at 205lbs going forward.

What do you think is next for Marvin Vettori following his big win over Paulo Costa at UFC Vegas 41?