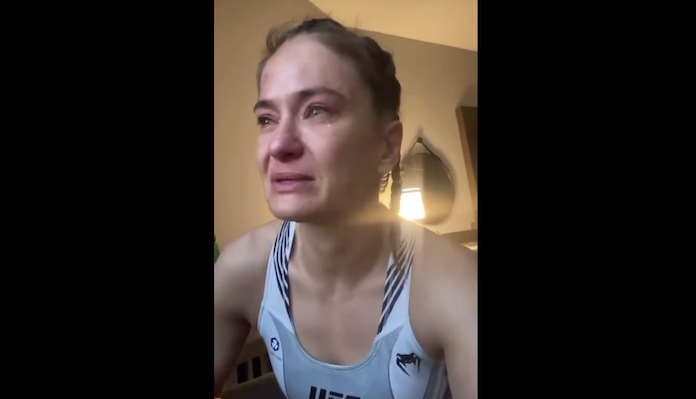 Karolina Kowalkiewicz broke down in tears following her UFC 265 loss, saying that “I need to maybe find a new passion in life and that hurts.”

Kowalkiewicz, who was once the No. 1 contender in the UFC women’s strawweight division, has really fallen on hard times in her MMA career over the last few years. She entered Saturday night’s fight against fellow veteran Jessica Penne on a four-fight losing skid, and that skid is now five straight fights after Penne submitted Kowalkiewicz with an armbar in the first round of their fight. Kowalkiewicz has now lost five straight fights, and taking to her social media following UFC 265, the Pole hinted that she could be finished with MMA.

“I need to maybe find a new passion in life, and that hurts. Simply.” #UFC265

While Kowalkiewicz was once one of the UFC women’s strawweight division’s best fighters — she even has a notable win over current champion Rose Namajunas — she has not looked the same over her last batch of fights, and at this point, it looks like she may be considering walking away from the sport and trying someone else with her life. While Kowalkiewicz was one of the best fighters in the 115lbs division for many years, it appears as though she is now on a massive decline and not anywhere close to the fighter she once was. Thus, it’s not totally surprising that she would be contemplating retirement now.

Either way, it seems unlikely that Kowalkiewicz will be fighting in the UFC again. With five straight losses, the world’s leading MMA promotion will likely cut her loose, which will give Kowalkiewicz the chance to potentially return home and fight for KSW in Poland if she so desires. But at this point, it does appear that retirement is a very real possibility.

What do you think is next for Karolina Kowalkiewicz after losing to Jessica Penne at UFC 265?