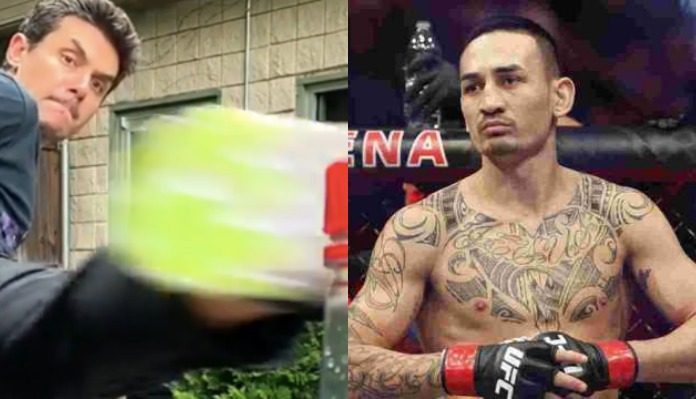 Earlier this week, UFC featherweight champion Max Holloway dropped jaws by nailing the “Bottle Cap Challenge.” As is tradition with Internet challenges of this kind, Holloway then extended a followup challenge to somebody else. His pick was musician John Mayer.

“Be curious my friends! #challengeaccepted#bottlecapchallenge Passing this on to our guy @johnmayer …. hey John if you can’t complete this challenge @erlsn.acr and I decided you have to come to Hawaii after your tour and kick it with us until you complete it!'” – Max Holloway on Instagram.

In a somewhat surprising twist, John Mayer promptly obliged Max Holloway on this challenge — and absolutely nailed it.

He then directed a followup challenge to Hollywood action star Jason Statham, who certainly seems like the type to accept a challenge of this kind.

At present Jason Statham has not attempted the Bottle Cap Challenge, but stay tuned to his Instagram to see if he does.

Max Holloway is currently gearing up for a featherweight title fight with former UFC lightweight champion Frankie Edgar. The bout will headline the UFC 240 card in Edmonton, Alberta, Canada on July 27, which will also feature a featherweight showdown between former champion Cris Cyborg and surging contender Felicia Spencer.

John Mayer, who is currently on tour, will be somewhere between Pittsburgh and New York when UFC 240 goes down, but perhaps we’ll see him cage-side at a Max Holloway fight at another time in the future. Are you surprised the musician was able to beat the Bottle Cap Challenge?