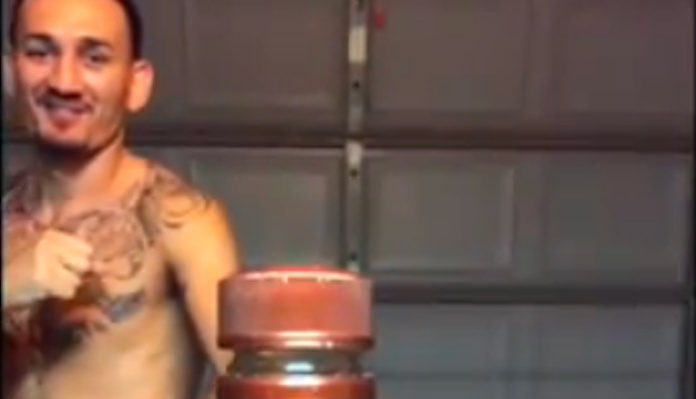 The Internet loves a good challenge. From the charitable Ice Bucket Challenge to the potentially lethal Tide Pod Challenge, these things tend to go viral very quickly. If a recent Instagram post from UFC featherweight champion Max Holloway is any indication, the Bottle Cap Challenge could be the next viral challenge to sweep the World Wide Web.

This decidedly un-hip sportswriter is admittedly unsure what the Bottle Cap Challenge actually is, but in this instance, it seems to involve a brilliantly measured spinning back kick and an empty bottle of Tito’s Vodka.

Whatever the case, it’s a sight to behold. See it below:

Given the accuracy with which Max Holloway kicks the cap of this Tito’s bottle, we can safely assume he had little to no role in emptying it. Besides, he’s training for a fight with Frankie Edgar at UFC 240.

Having completed this feat, Max Holloway issued a followup challenge to Guitar God John Mayer. The champ warned the musician that if this challenge goes unanswered, he’ll fly him out to Hawaii to “kick it.” That really doesn’t sound so bad.

At the time of this writing, John Mayer hasn’t responded to this challenge. That said, he’ll probably accept it before Hollywood actor Mark Wahlberg accepts Conor McGregor’s invitation to fight in the Octagon.

As aforementioned, Max Holloway is currently gearing up for a featherweight title defense opposite former UFC lightweight champ Frankie Edgar, which will headline UFC 240 on July 27 in Edmonton, Alberta, Canada. This bout will mark the Hawaiian’s opportunity to rebound from a competitive decision loss to Dustin Poirier, which ended a 13-fight unbeaten streak.