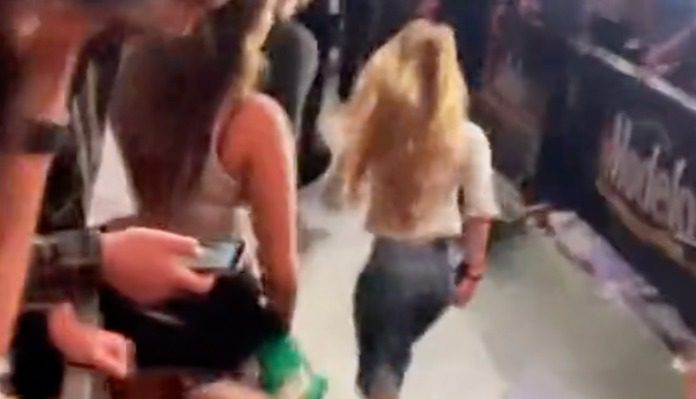 A fight fan tried to get into the Octagon at UFC 274 but it did not end well for her.

After Charles Oliveira submitted Justin Gaethje at UFC 274, and the highlight was playing on the jumbotron, a fan jumped out of her first-row seat to run towards the Octagon. At first, it looked like she planned it perfectly as she was right behind people making their way to the Octagon, but once a security guard saw her make the leap she was thrown to the ground.

At this time, it’s uncertain who this female is or if she was charged with anything. Whether or not she sustained any injuries is also unknown. It is likely she was kicked out of the arena after what she did, but the good news for her is the event had already ended before she ran towards the Octagon at UFC 274 so she didn’t miss any fights.

In the main event of UFC 274, Charles Oliveira submitted Justin Gaethje in the first round. It should’ve been his second title defense but he missed weight by 0.5lbs so he had to vacate the lightweight title. Before this win, he had submitted Dustin Poirier to defend his belt for the first time after knocking out Michael Chandler last May to win the vacant title.

The co-main event of UFC 274 saw Carla Esparza edge out a split decision over Rose Namajunas to win the strawweight title again. It was a lackluster fight that did not see much action but Esparza ended up getting her hand raised.

What do you make of the fan trying to get into the Octagon at UFC 274?