Vicente Luque believes a fight with Colby Covington could be the ticket for him to secure a UFC welterweight title shot.

Luque (21-7 MMA) is scheduled to meet up with Belal Muhammad (20-3 MMA) at UFC Fight Night main event on Saturday, April 16th. It will be their second fight, the first taking place back in November of 2016 where ‘The Silent Assassin’ came out the victor.

In anticipation of going 2-0 against Muhammad in his first UFC headliner, Luque has his sights set on fighting the former two-time title challenger Colby Covington (17-3 MMA).

In speaking with ‘ESPN‘, Luque had this to say about a potential Covington match-up:

“He’s the No. 1 contender. He’s coming off a win. I don’t know what’s gonna happen in the division until I fight and after I fight, so it might be a good fight for me to secure that No. 1 contender (spot) and get the next title shot, so we got to see what’s going to happen.” 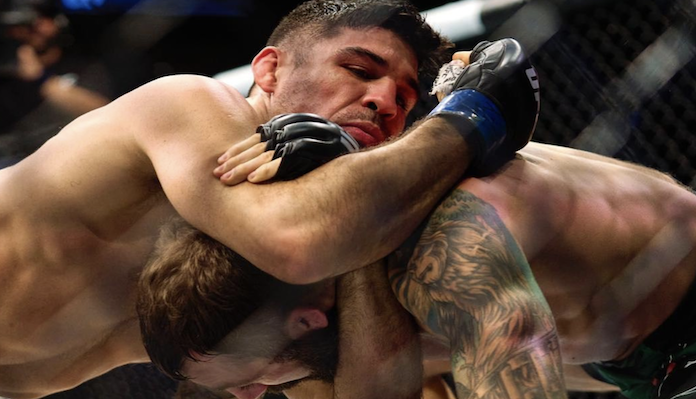 Luque, 30, has won four of his past five fights and if he defeats Muhammad, he’s believing a match-up with Covington will prepare him for getting in the Octagon with Kamaru Usman.

“He’s a wrestler. He’s a guy that’s gonna try to control me, very (much) like Kamaru would try and do against me, so I think it would be a good training. Go in there, five rounds against a guy like Colby and go out there and try and beat him, secure my No. 1 spot, and that might be an option for sure.”

No doubt about it, Luque is already looking past Muhammad, and wanting to secure a title fight.

Would you like to see Vicente Luque vs. Colby Covington in the near future? What is your prediction for his upcoming fight with Belal Muhammad?