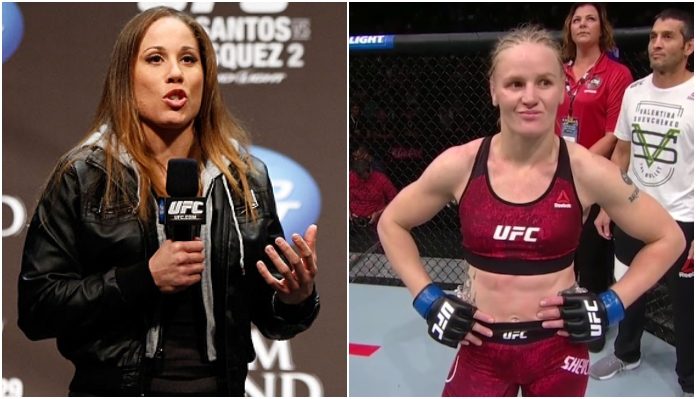 UFC women’s flyweight champion Valentina Shevchenko is getting right back into the Octagon after her first successful title defense. Shevchenko defeated Jessica Eye at UFC 238 in Chicago with a highlight reel head kick earlier this month, and she’s getting a quick turnaround for her second title defense.

According to Brett Okamoto of ESPN citing multiple sources, Shevchenko will defend her flyweight title against Liz Carmouche on August 10, in the main event of UFC Uruguay.

Breaking: Valentina Shevchenko vs. Liz Carmouche will headline UFC Fight Night on Aug. 10 in Uruguay, per multiple sources. Carmouche is only one of two women to ever defeat Shevchenko in MMA. It happened back in 2010, at a regional show outside Oklahoma. pic.twitter.com/4JbJ6uETrv

As noted, Liz Carmouche is one of only two fighters to defeat Shevchenko, being the first to defeat the current champion back in 2010. In a recent interview with BJ Penn Radio, Shevchenko discussed her desire to rematch Carmouche who is currently on a two fight winning streak. Shevchenko told BJ Penn Radio that her focus is to remain champion, and that no one will take the belt from her.

“You can never erase [a loss] it but you still gain another [win],” she added. “I’m here to continue my victory, I’m here to continue to be the champion and I will never let no-one take this belt because I will train harder than any one of them, that’s why this is going to be a good [fight].”

Carmouche is known as a pioneer in women’s MMA, having faced former UFC bantamweight champion and WWE superstar Ronda Rousey in the first women’s title fight in UFC history.

Liz Carmouche had previously been scheduled to face Roxanne Modafferi at UFC on ESPN 4, but will now have another chance to earn a UFC title. As for the champion, Valentina Shevchenko will look to extend her current winning streak to four fights with a win over Carmouche, and successfully defend her title for a second title.

Who do you see winning the flyweight title fight between Valentina Shevchenko and Liz Carmouche?