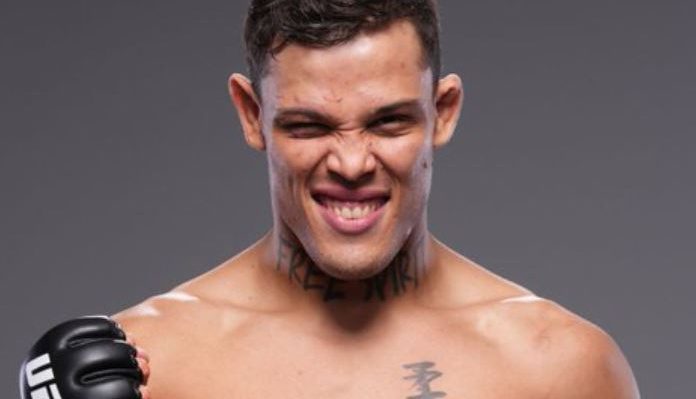 Borralho (11-1 MMA) will be looking to earn his fourth win in a row when he takes to the Octagon this evening. ‘The Natural’ scored a unanimous decision win over Gadzhi Omargadzhiev in his most previous effort.

Round one of the UFC Vegas 58 co-main event begins and Caio Borralho with some side kicks to start. He shoots in and gets an easy takedown. Armen Petrosyan gives his back trying to scramble up. Borralho is searching hard for a rear-naked choke. Petrosyan trying to throw off his back, but Borralho gets an arm around his neck. Armen scrambles and breaks free from the choke but Caio is still on his back. The position stays the same as the horn sounds to end round one.

Round two of the UFC Vegas 58 co-main event begins and Armen Petrosyan lands a pair of low kicks to start. A right hand scores for Petrosyan, and then another low kick. Borralho with a body kick and then shoots in and scores a nice double leg takedown. Petrosyan is trying to use the cage to stand back up, but Borralho moves to side control and directs him away from the fence. Borralho transitions to full mount. Petrosyan bucking hard and slips out the back, Borralho goes for a guillotine but loses it and Petrosyan is back to his feet. He immediately lands a pair of low kicks. More low kicks from Petrosyan. The referee tells Borralho to stand back up. A left hook for Caio Borralho hits the mark. Petrosyan with a low kick and a right hand. Both men land rights in the pocket. A body kick from Borralho. Petrosyan replies with a low kick. Caio shoots in and lands another big double leg takedown. He immediately moves to the back of Armen and looks for a rear-naked choke. The horn sounds and we will see a third and final round.

Round three of the UFC Vegas 58 co-main event begins and Armen lands a body kick and then the fighters trade kicks out in open space. A hard right from Petrosyan and a couple low kicks. Another body kick from Petrosyan. Borralho with a counter right and then a 1-2. He eats an overhand left and drives forward on a double leg. Petrosyan defends well and pulls Borralho up into the clinch against the fence. Short knees traded. Caio Borralho looks for a trip but it doesn’t work. Borralho drops to try and wrap up a leg but once again it does not lead to a takedown. Petrosyan landing low kicks now. The fighters clinch. Armen breaks free and lands a knee and a punch to close out the round.

Who would you like to see Borralho fight next following his decision victory over Petrosyan at tonight’s UFC event in Las Vegas? Share your thoughts in the comment section PENN Nation!