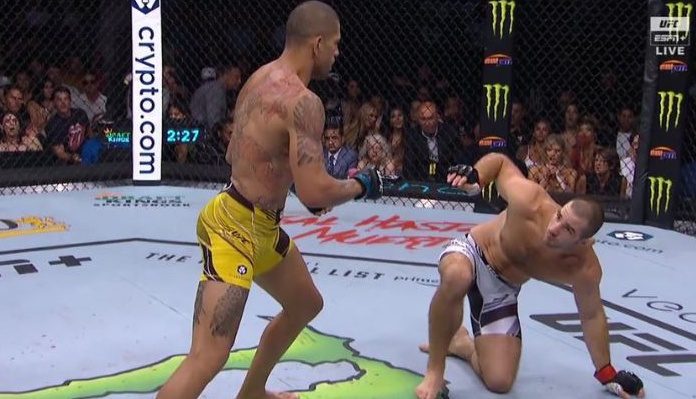 Strickland (25-4 MMA) and Pereira (5-1 MMA) collided in a perennial number one contender bout for the middleweight division last weekend. The bout did not make it out of the first round and it was the American on the receiving end of a brutal knockout loss (see that here).

As he said he would pre-fight, Sean Strickland decided to stand and trade leather with the former Glory champion. That decision proved costly as a slick combination from Pereira put Strickland down midway through the opening frame.

Former UFC title challenger Chael Sonnen recently weighed in on the outcome and suggested that Sean Strickland deserves a pass for this recent defeat.

“I can’t give Sean too hard of a time in fairness because the fight was so short,” Sonnen said. “We don’t know what was to come. We’re only looking at a couple minutes of fight here. Sean’s going forward, Sean hadn’t quite got down to cutting him off yet, the elevation change, some of these things could have still been in the plan and it got cut short.”

“Can we give Sean a pass? I mean, Sean was trying to do what the audience really wanted to see. The audience really wanted to see this fight but if we knew Sean was just going to go out, tackle him, put him in a realm he had never been in, all the sudden they lose interest a little bit. They wanted Sean to stand and trade. That’s you guys. You were the audience. That’s what you wanted, he went out and gave you what you wanted. Is it really fair that we kick him now?”