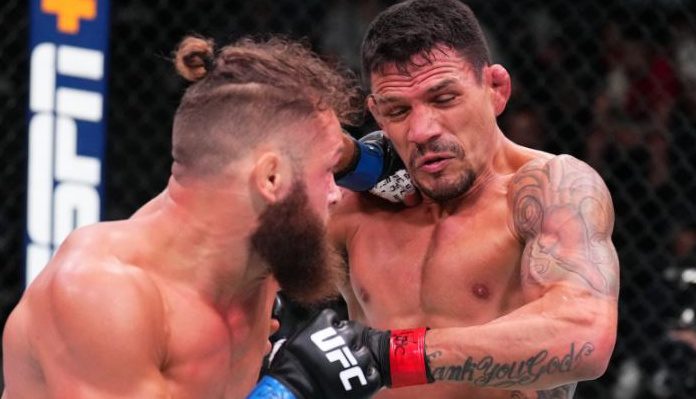 Dos Anjos (31-13 MMA) will enter the contest sporting a two-fight winning streak, this after scoring decision victories over Paul Felder and Renato Moicano. The former UFC lightweight champion is looking to get back into title contention with a win this evening.

Meanwhile, Rafael Fiziev (11-1 MMA) was last seen in action in December of 2021, where he scored a sensational knockout victory over Brad Riddell. ‘Ataman’ currently boasts a five-fight winning streak with his lone career setback coming against Magomed Mustafaev.

Round one of the UFC Vegas 58 main event begins and Rafael Fiziev lands a body kick and then another. Rafael Dos Amjos looks for a high kick. Fiziev with another body kick and a high kick as RDA pushes forward. A left hand scores for Dos Anjos and a jab behind it. A left hook from Fiziev. RDA with a jab and then he shoots for a double leg. Fiziev digs on the under hooks and gets pushed to the cage. Knees from the position by Dos Anjos. Fiziev finally circles out and lands a jump knee and then a right hook. A 1-2 from RDA and a body kick. Fiziev sends one right back, and another. A left hook from Fiziev and then a body combo. RDA pushes forward behind his jab. A hard low kick for Rafael Dos Anjos. Fiziev returns fire with a jab and then a body kick. Another double leg attempt from RDA. Fiziev pushed to the cage but defends well. Knees traded inside. An elbow from RDA as his opponent breaks free from the cage. Fiziev with an elbow in return. He lands a big right hand and then a body kick. A jab from RDA closes out the round.

Round two of the UFC Vegas 58 main event begins and Rafael Dos Anjos lands a nice body kick. A 1-2 to the body from Fiziev. Another big body kick for RDA and Fiziev clinches fup. The former champion breaks free and lands a 1-2. Fiziev responds with an eye poke and we have a short break. We restart and Rafael Fiziev comes forward with a high kick. RDA with a 1-2 and a jab. He lands a short left and then dives in on a single leg. Fiziev defending, but RDA has the bodylock. Fiziev peels off his hands and RDA sticks him on the cage in the clinch. Rafael Fiziev breaks free to open space. He lands a left. That is returned by RDA and then a hard jab. A body kick from Dos Anjos. Fiziev with a body head combo. More hard hooks from Fiziev and another body kick. RDA with a right as Fiziev digs to the body. Hard jab from RDA and then a body kick. A beautiful takedown now from RDA, but Fiziev quickly scrambles out of it. He sticks RDA on the cage in the clinch. RDA reverses position but eats a knee. More knees but now they’re coming from RDA. Fiziev decides to back off. A 1-2 from RDA. A low kick for Fiziev. A leaping left scores for Dos Anjos. He lands with a jab but then eats a heavy 1-2 counter. Another heavy combo for Rafael Fiziev. The fighters trade low kicks to close out the round.

Unrelenting pace by these LWs heading into the 3rd #UFCVegas58 pic.twitter.com/WaNq7dV0B9

Round three of the UFC Vegas 58 headliner begins and Rafael Fiziev lands a pair of hard hooks. RDA shoots the single and drives him to the cage. Dos Anjos working hard on the body lock to try and take Fiziev down. He gets him down for a moment to get one hook in, but Fiziev is right back up and in the clinch. RDA dropping back down for a single leg, Fiziev hops away back to open space. A body kick from Fiziev and then another. A left hand from Rafael Dos Anjos and he shoots in on a  double leg. Fiziev defends the takedown well and turns RDA to the cage. A nice knee from RDA and then a jab. Fiziev with a left hook and a hard body kick. He connects with a nice right. Fiziev and RDA clinch up, Fiziev pushes him to the cage and they exchange short knees. RDA escapes back to range and eats a right hand. A low kick from RDA. Rafael Fiziev with a jump knee to a hook combo. A hard jab from RDA.

Round four of the UFC Vegas 58 main event begins and Rafael Fiziev lands a good kick to the body. The former champion returns fire with a low kick and then a knee. The fighters clinch and exchange knees and punches. RDA shoots for a takedown. Fiziev defends well but Dos Anjos is relentlessly searching for this. He gets the fight to the ground and lands a punch from top position. Fiziev throwing a few punches off his back as RDA looks to scoot him off the fence. No real offense out of this for Dos Anjos here. He lands a short punch to the body before the horn sounds to end round four.

The fifth and final round of the UFC Vegas 58 main event begins and Fiziev lands a body kick. Dos Anjos with a jab. A big left hook from Fiziev and RDA is down. This one is all over.

Who would you like to see Rafeal Fiziev fight next following his knockout victory over Rafael Dos Anjos at tonight’s UFC event in Las Vegas? Share your thoughts in the comment section PENN Nation!