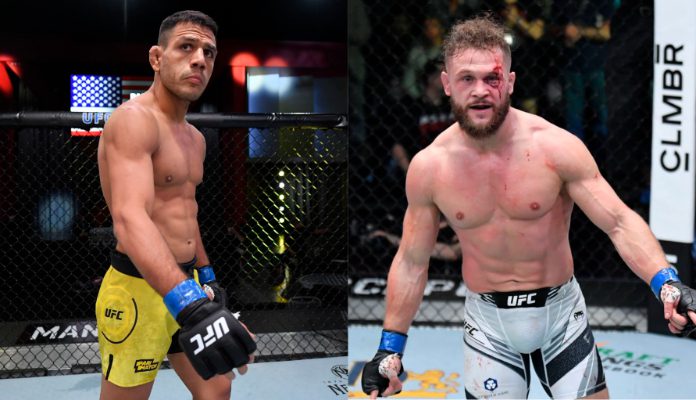 Dos Anjos (31-13 MMA) will enter the contest sporting a two-fight winning streak, this after scoring decision victories over Paul Felder and Renato Moicano. The former UFC lightweight champion is looking to get back into title contention with a win this evening.

Meanwhile, Rafael Fiziev (11-1 MMA) was last seen in action in December of 2021, where he scored a sensational knockout victory over Brad Riddell. ‘Ataman’ currently boasts a five-fight winning streak with his lone career setback coming against Magomed Mustafaev.

Borralho (11-1 MMA) will be looking to earn his fourth win in a row when he takes to the Octagon this evening. ‘The Natural’ scored a unanimous decision win over Gadzhi Omargadzhiev in his most previous effort.

Rafael dos Anjos vs. Rafael Fiziev – Fiziev def. Dos Anjos via KO at 0:18 of Round 5

Jared Vanderaa vs. Chase Sherman – Sherman def. Vanderaa via TKO (punches) at 3:10 of Round 3

Cody Brundage vs. Tresean Gore – Brundage def. Gore via KO (punches) at 3:50 of Round 1

Came in with the 𝙎𝙇𝙄𝘾𝙆 RD 2 submission ⚡️

Karl Roberson vs. Kennedy Nzechukwu – Nzechukwu def. Roberson via TKO (elbows) at 2:19 of Round 3

WHAT A FINISH BY Kennedy Nzechukwu! 😤#UFCVegas58 pic.twitter.com/2WIGPRLCAn

Who are you picking to win tonight’s UFC Vegas 58 main event between Rafael Dos Anjos and Rafael Fiziev? Share your thoughts in the comment section PENN Nation!