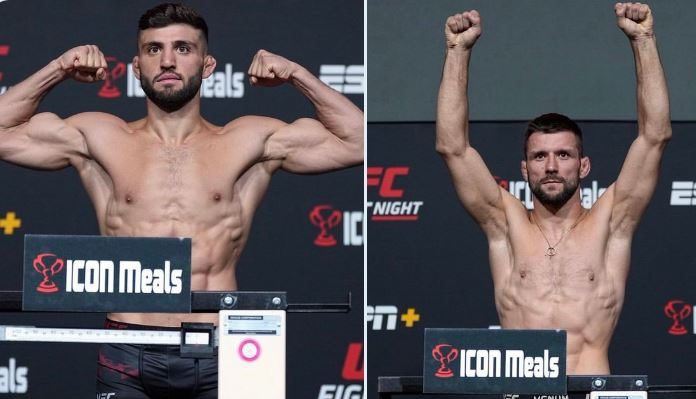 Round two of the UFC Vegas 57 headliner begins and Arman Tsarukyan throws a body kick. Mateusz Gamrot catches it, but can’t do anything with it. Low kick for Tsarukyan. Check hook from Tsarukyan as Gamrot steps in on a 1-2. High kick from Tsarukyan. Gamrot pressing forward, Tsarukyan backs him up with a 1-2. Right hand from Gamrot, and another. Tsarukyan with a right to the body. Both men swinging wild but not connecting clean. Tsarukyan pops his jab and lands a huge body kick. And another. Arman Tsarukyan shoots in and Mateusz Gamrot sprawls and sweeps. Tsarukyan slides out the side and lands a shot as they stand and get back to range. A left hook now from Gamrot. A body kick for Tsarukyan and then a hook to the body. Heavy hook from Gamrot. Tsarukyan another body kick. Body kick for Gamrot at the bell.

Round three of the UFC Vegas 57 headliner begins and Arman Tsarukyan lands a pair of body kicks. Gamrot clinches, lands a couple punches and backs off. 1-2 from Gamrot. Low kick for Tsarukyan, both men land left hands. Jabs from both men. Gamrot with a right. Tsarukyan lands a huge right as Gamrot ducks in for a takedown. Tsarukyan pushes him off. Mateusz Gamrot with a clean combination. A left hook now from Tsarukyan. Gamrot shoots, gets him down for half a second and he’s back up against the cage. Gamrot keeping the bodylock. Knees to the thigh from Gamrot, Tsarukyan can’t break the bodylock thus far. Gamrot just kneeing away. He takes Tsarukyan down and then moves to his back. One hook in. Tsarukyan right back up to his feet, but the bodylock remains. Arman Tsarukyan finaly back to range, they trade hooks and right hands at a distance. 1-2 from Tsarukyan and then a jab. A big right now from Tsarukyan. Gamrot returns fire with one of his own. Spinning back kick to the liver from Tsarukyan and both men land right hands before clinching momentarily. A high kick now from Tsarukyan. He lands a body kick before the horn sounds to end round three.

Round four of the UFC Vegas 57 main even begins and  MateuszGamrot lands a 1-2 but eats a left. Hard hooks traded, both men get their heads snapped back. Gamrot shoots and pushes Tsarukyan to the cage. He backs off and then eats a high kick. Arman Tsarukyan with a spinning back fist and Gamrot goes down. Tsarukyan jumps on a front headlock. Gamrot hits the double leg off his knees. Tsarukyan up fast and against the cage, Gamrot backs off to range. Body kick for Tsarukyan, Gamrot with a jab. Right hand from Gamrot. Tsarukyan with a 1-2. A body kick lands for Tsarukyan. He tries another backfist, but eats a jab. Both men land right hands. Body kick off a 1-2 for Tsarukyan, follows it with another. Lands another big body kick, but Gamrot shoots through it to take him down. Gamrot on Tsarukyan’s back. Tsarukyan crawling to the cage, Gamrot working for the RNC, Tsarukyan scrambling and Gamrot moves to top control. Tsarukyan up to his feet at the bell.

The fifth and final round of the UFC Vegas 57 main event begins and Arman Tsarukyan lands a nice combination. Mateusz Gamrot counters with a big right hand. The two go back and forth in another entertaining round to close out the contest.

Who would you like to see Tsarukyan fight next following his victory over Gamrot this evening in Las Vegas? Share your thoughts in the comment section PENN Nation!