Tonight’s main event proved to be a wild back and forth affair. Marlon Vera was able to drop ‘The Dominator’ in the early seconds of the opening round, but Cruz battled back to arguably take the points in the first five minutes. The former champion would continue to perform well in round two before ‘Chito’ eventually began to change the tide in round three. Then, in round four, Vera connected with a high which sent Cruz crashing to the canvas. A few follow up shots and the referee quickly stepped in to stop the fight.

The co-main event of UFC San Diego featured a featherweight contest between Nate Landwehr and David Onama. The bout resulted in one of the greatest featherweight fights of all-time. Landwehr and Onama went to absolute war for fifteen straight minutes, with both men getting badly rocked on multiple occasions during the three round affair. After fifteen minutes of heart-pounding action, Landwehr was awarded the majority decision win.

Following the conclusion of tonight’s event, UFC officials announced at the post-fight press conference that four fighters would be taking home bonuses. 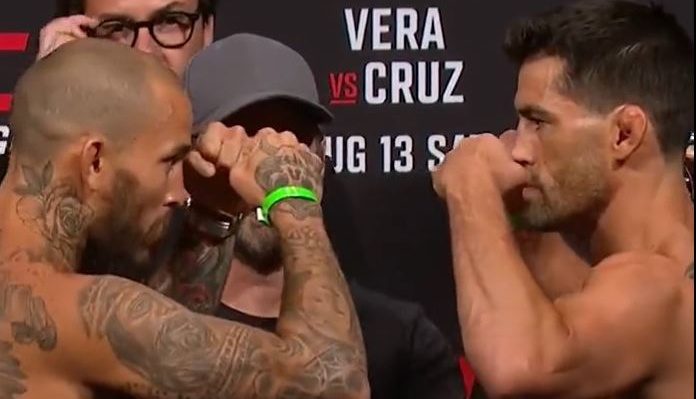 Fight of the night: Featherweight fighters Nate Landwehr and David Onama each pocketed an additional $50k for their thrilling battle in tonight’s co-headliner. After fifteen minutes of wild action, Landwehr wound up edging out a majority decision win.

Performance of the night: Marlon Vera pocketed an extra $50k for his sensational fourth-round knockout victory over Dominick Cruz in tonight’s event headliner. ‘Chito’ landed a head kick that sent ‘The Dominator’ crashing to the canvas and promptly followed up with punches to secure the finish.

Performance of the night: Tyson Nam took home an extra $50k for his first-round knockout victory over Ode Osbourne on today’s prelims.

Are you surprised by any of the performance bonuses handed out by Dana White and company following the conclusion of tonight’s UFC San Diego event?