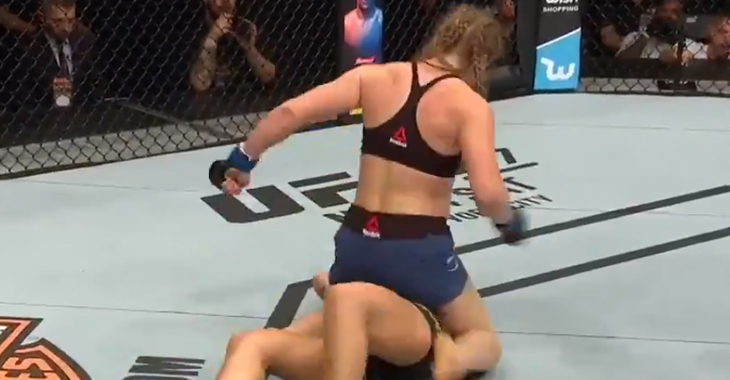 Tonight’s contest will serve as a rematch, as Ladd and Eubanks originally collided under the Invicta banner in January of 2017, with Aspen emerging victorious by way of unanimous decision.

Meanwhile, Sijara Eubanks (4-2 MMA) was last seen in action at November’s UFC 230 event, where she scored a unanimous decision victory over Roxanne Modafferi.

Round one of the UFC Rochester featured prelim begins and Eubanks comes forward with a combination. Ladd answers with a low kick. Eubanks shoots in and gets double under hooks. She picks Ladd up and slams her to the floor. Sijara working from full guard here. She postures up and lands some good punches. Eubanks passes to half guard and lands a left hand. Ladd scrambles but Eubanks is on her back. Aspen stands up but Eubanks still has a hold of her. Eubanks looking for a single leg. Ladd locks up a guillotine and it is tight. Eubanks escapes but gives up her back in the process. Ladd looks to lock in a hook. She sinks in her right leg. Eubanks scrambles and gets up to her feet. Ladd is still draped all over her. Aspen drags Eubanks back to the floor and looks for a neck crank. She can’t secure the finish and once again Eubanks fights her way back to her feet. Sijara breaks free from the clinch and unleashes a nice combination. Another flurry from Sijara Eubanks and Aspen Ladd is down. Sijara with ground and pound but cannot secure the finish before the horn sounds to end round one.

Round two begins and Eubanks lands her jab. Interestingly Ladd’s corner told her she needs this round during the break. Aspen with a jab. Eubanks returns fire with a left hook. Aspen shoots in and forces the fight against the cage. Eubanks reverses the position and lands a knee. Ladd continues to press. She scores a trip takedown and winds up in side control. Aspen moves to mount and then takes the back of Eubanks. She is looking for a rear-naked choke. Eubanks escapes the hold but Aspen is all over her with punches now. She switches back to a rear-naked choke attempt. Sijara defends well so Ladd goes back to unleashing ground and pound. One minute remains in the second round. Big elbows and punches from Aspen Ladd. Eubanks survives to hear the horn.

Round three begins and both women appear happy to stand and trade early. Big hooks from both ladies. Ladd with another left. Eubanks goes to the body. Ladd continues to press forward but Sijara is catching her with the jab. The fighters clinch in the center of the cage and Eubanks lands a nice elbow. They break and this time it is Aspen Ladd who lands an elbow. A good combination from Eubanks lands. Aspen fires right back with one of her own. Sijara goes to the body and then upstairs. Ladd answers with a crisp jab followed by a right. This fight is a war. Both ladies are getting off huge shots. Eubanks with a left hook, Ladd with a standing elbow. Ninety seconds remain. Eubanks continues to find a home for her left hook as Ladd presses forward. Aspen shoots in for a late takedown. She presses Eubanks against the cage. Ladd looks for the trip but Sijara defends. Thirty seconds remain. Ladd wants this final takedown. Eubanks and Ladd stand and trade until the final horn. WOW!