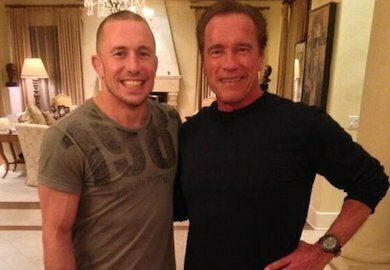 The incident occurred while the former California Governor, Schwarzenegger, was attempting to film children at a sporting event in Johannesburg.

As seen in the video below, a man charged toward Arnold and unleashed a jumping kick that struck the 71-year-old in the back.

Here is another angle of the incident.

Somebody blindsided Arnold Schwarzenegger with a running drop kick and it was like when that biker hit him with a pool stick in T2. It barely fazed him. He’s 71! https://t.co/XBlYBlCupH

Arnold Schwarzenegger later took to Twitter with the following message regarding today’s bizarre assault: “Thanks for your concerns, but there is nothing to worry about. I thought I was just jostled by the crowd, which happens a lot. I only realized I was kicked when I saw the video like all of you. I’m just glad the idiot didn’t interrupt my Snapchat.”

The fan favorite actor had been attending his Arnold Classic Africa event, which features dozens of different sporting events and fitness activities.

Schwarzenegger took to Twitter later this afternoon with the following video for his fans.

Do me a favor: instead of sharing the video of the guy who wants to be famous, watch some of our @ArnoldSports athletes like this young hero proving that fitness is for everyone who deserve to be famous. They’re on my Snapchat. pic.twitter.com/EuMynJ7t1n

Apparently the assailant was “known to the police for orchestrating similar incidents in the past”.

Despite being kicked in the back at today’s event, Arnold Schwarzenegger is still fine and in good spirits. He plans on attending tomorrow’s festivities.