UFC on ESPN 12: ‘Poirier vs. Hooker’ Live Results and Highlights

The Octagon remains in Las Vegas for UFC on ESPN 12, a ten-bout fight card headlined by a lightweight fight between Dustin Poirier and Dan Hooker.

Poirier (25-6 MMA) will be returning to action for the first time since suffering a submission loss to Khabib Nurmagomedov in his bid for the undisputed lightweight title at UFC 242. Prior to the setback, ‘The Diamond’ was on a six-fight unbeaten streak, which included stoppage victories over Anthony Pettis, Eddie Alvarez and Justin Gaethje.

Meanwhile, Dan Hooker (20-8 MMA) will enter tonight’s UFC headliner on a three-fight win streak, his latest being a split decision victory over Paul Felder in February. 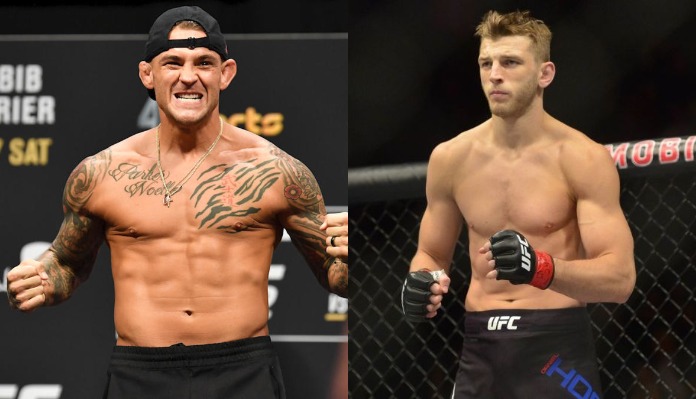 Perry (13-6 MMA) will be looking to snap a two-fight losing skid when he squares off with Gall this evening. After starting his UFC career 4-1, ‘Platinum‘ has gone just 2-5 over his past seven Octagon appearances.

As for Mickey Gall (6-2 MMA), the 28-year-old was most recently seen in action at UFC Newark this past August, where he scored a unanimous decision victory over Salim Touahri.

Get all of tonight’s UFC on ESPN 12: ‘Poirier vs. Hooker’ live results and highlights below:

Sean Woodson vs. Julian Erosa – Erosa def. Woodson via submission at 2:44 of Round 3

Luis Pena vs. Khama Worthy – Worthy def. Pena via submission (guillotine choke) at 2:53 of Round 3

Who are you picking to win tonight’s UFC event headliner between Dustin Poirier and Dan Hooker? Share your thoughts in the comments section PENN Nation!

This article appeared first on BJPENN.COM
Previous articleColby Covington shares prediction for tonight’s Dustin Poirier vs. Dan Hooker main event
Next articleJorge Masvidal claims the UFC – Reebok deal is “gone”, wants fighters to have a say in the next partnership
© Newspaper WordPress Theme by TagDiv