The UFC’s former middleweight champion, Whittaker (20-5 MMA), will be returning to action this evening for the first time since surrendering his title to Israel Adesanya at UFC 243.

Prior to his setback to ‘Stylebender’, ‘The Reaper’ was riding a nine-fight win streak, which included victories over Yoel Romero (x2), Jacare Souza and Uriah Hall.

Meanwhile, Darren Till (18-2-1 MMA) made his middleweight debut this past November at UFC 244, where he earned a split decision victory over Kelvin Gastelum. That win snapped a two-fight losing skid for the Liverpool native, as Till had previously suffered stoppage losses to Tyron Woodley and Jorge Masvidal respectively. 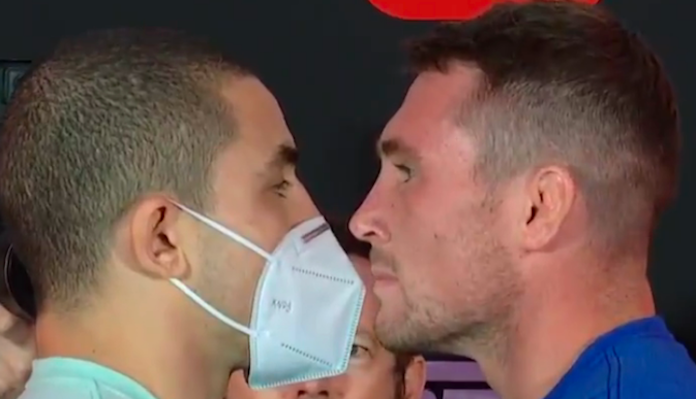 ‘The Gorilla’ is confident that a win over Robert Whittaker this evening will earn him a middleweight title shot against the winner of Israel Adesanya vs Paulo Costa.

Round one of the UFC Fight Island 3 main event begins and Till charges in but gets caught with a jab. Whittaker with another jab. Darren Till continues to press the action early. Robert Whittaker is being very patient early on here. He throws a front kick but Till catches it and throws his limb aside. The fighters clash while throwing punches and it appears Whittaker could be wobbled. Darren Till apparently hit him with a elbow. The Liverpool native lands a left hand and then throws a high kick. Whittaker throws back a combination but nothing lands. Till presses him up against the cage. Whittaker lands a knee but Till answers with one of his own. Darren breaks free and goes high with a kick. It is partially blocked but there was a lot of heat on that. Whittaker with a nice low kick. He goes high and just misses with a head kick. Till comes forward but Whittaker counters nicely with a right hand. The Aussie follows that up with a straight right hand. He definitely appears to have recovered from that early elbow. The horn sounds to end round one.

Round two of the UFC Fight Island 3 main event begins and both men are swinging big shots early. Robert Whittaker lands a nice right hand but Darren Till answers quickly with a left. A low kick lands for the Liverpool native. Whittaker charges forward and lands a right hand that drops Till. He immediately jumps on him and begins unleashing ground and pound. A hard elbow lands for the former champion. He moves to half guard. Darren Till gives up his back but is able to get back to his feet and escape. We are back to standing and Till is pressing the action but seems more cautious in his approach. Robert Whittaker with a hard low kick. He misses with a leaping left hand. Till with a left that appears to get blocked. Another nice combination lands for Whittaker. Till with a head kick which is blocked. Robert misses with a high kick of his own. Round two comes to an end.

Round three of the UFC Fight Island 3 main event begins and Robert Whittaker lands a hard outside low kick. He lands a left hand but Till answers with an uppercut. Darren leaps in with a left that falls short. Whittaker circles fires off a right hand that partially connects. Both men appear happy to keep this fight standing for now. Whittaker just misses with a head kick. Darren Till matrixed that one. Whittaker with a crisp left hand. Till leaps in with a left. Whittaker misses with a high kick and then a spinning back fist attempt. That was a wild combination but nothing landed. Robert shoots in but Darren shrugs him off. Just over one minute remains. Whittaker again shoots in and presses Till against the cage but cannot get the Englishman down. Darren circles off the fence and Whittaker attacks with a huge punch that misses the mark. The horn sounds to end round three.

Round four of the UFC Fight Island 3 main event begins and Robert Whittaker lands an early left hand. Darren Till is starting to sport some bruising on his face. Regardless, he fires off a heavy low kick that connects. Whittaker is looking to counter. Till nails him with an elbow. Robert is rocked. Till comes forward with a flurry. Whittaker avoids and circles out. He appears to be ok and lands a low kick. Whittaker with a leaping left jab. He looks for an overhand right but Till ducks under and threatens with a single leg. He let’s that go and we are back to striking. Whittaker with a left that partially connects. Till responds with one of his own. One minute remains in the round. Whittaker with a nice uppercut. Darren responds with a right hand but eats another left hand counter from the Aussie. The horn sounds to end round four.

The fifth and final round of tonight’s main event begins and Robert Whittaker lands a left hand but Darren Till counters with a right. Both men are still swinging heavy leather. ‘The Reaper’ looks for a single leg but gives up on it. Till with a nice left hand. He misses with a high kick. Whittaker paws with his jab but those punches fall short. He lands a front kick to the body with little power on it. Till with a combination that falls short. Whittaker with a low kick. He leaps in with a left hand that misses. Both men with kicks now. Whittaker shoots in but once again Till denies the takedown. Midway through the round now. Robert Whittaker with another big right over the top but Till appears to block it. ‘The Reaper’ with a low kick now. Darren Till charges forward and lands a left. Whittaker circles and switches angles. He lands a low kick and then comes over the top with a punch. One minute remains. Till throws a left that misses. He lands a good elbow but Whittaker just eats it. He’s bleeding from the strike but seems fine. Till charges in with a right that misses and Robert grabs him and tosses him to the floor. Till is back up and then back down again. Ten seconds remain. Till is back to his feet but Whittaker has him pressed against the cage. The horn sounds to end the fight. What a war!

Who would you like to see Robert Whittaker fight next following his decision victory over Darren Till this evening on Yas Island? Share your thoughts in the comments section PENN Nation!