Usman and Edwards originally met back in December of 2015, where it was ‘The Nigerian Nightmare’ who defeated ‘Rocky’ via unanimous decision.

The two would meet again in August of 2022 at UFC 278 with Edwards coming from behind and defeating Usman via KO, becoming the new welterweight champion. 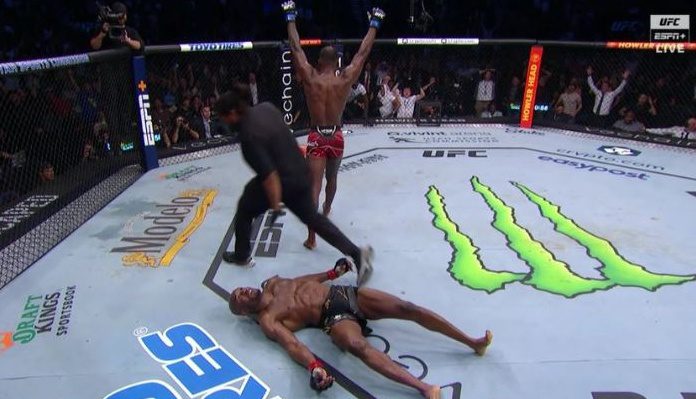 Inevitably there has to be a trilogy fight to settle the score and obviously Usman wants the belt back.

After Usman appeared with a hand brace back in December, rumors ensued that he would not be ready or able to fight this coming March. Ali Abdelaziz, Usman’s manager, dismissed those rumors and indicated Usman will be ready to meet Edwards in the Octagon.

Edwards on a recent episode of the ‘Believe You Me’ podcast with Michael Bisping, confirmed that he was told the trilogy fight with Usman is on (h/t MMANews):

“Yeah, 100%. That’s what I’ve been told. That’s what me and my team’s been told. I spoke to the UFC last week, I think. And they said the fight’s on. He’s already training for the fight. So I was like, OK, perfect. So I am aiming towards that. But if something changes in the meantime, then we’ll go from there. But now, I’m focused on having that trilogy against Usman in London.”

It should be noted that the UFC has not made an official announcement of the trilogy fight to date.

Are you looking forward to Edwards vs Usman III? Do you think Edwards can retain the belt?

This article appeared first on BJPENN.COM
Previous articleUFC Vegas 67: ‘Strickland vs. Imavov’ weigh-in results: One fight scratched
Next articleChael Sonnen believes that Islam Makhachev could retire regardless of the outcome at UFC 284
© Newspaper WordPress Theme by TagDiv