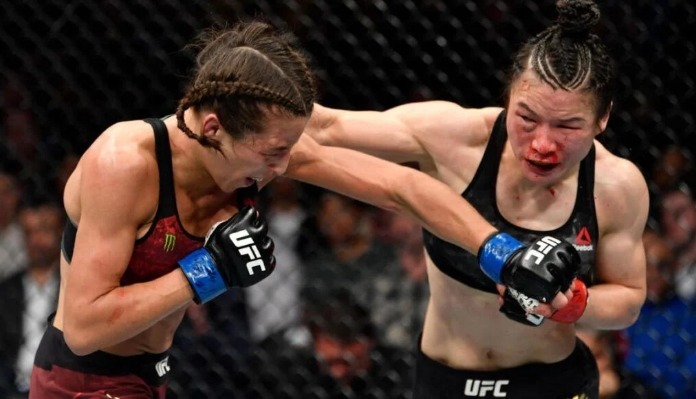 The pair first met back at UFC 248 in March of 2020, with Zhang emerging victorious by way of split-decision in a thrilling “Fight of the Year” performance.

Joanna Jedrzejczyk has not competed since suffering that defeat but is eager to get back in the Octagon this evening.

As for Weili Zhang, UFC 275 will serve as an opportunity to rebound, this after suffering back-to-back losses to former strawweight champion Rose Namajunas.

Round one of ‘Jedrzejczyk vs. Zhang 2’ begins and the Chinese fighter lands a low kick. Joanna misses with a punch. A leg kick from Joanna connects. Zhang counters with a punch. A left hook by Joanna Jedrzejczyk. A follow up leg kick puts Weili Zhang on the floor for a brief moment. There is no feeling out process here! A big takedown by Zhang. She is landing punches right away from top position. Joanna scrambles back to her feet but that is short lived. Zhang lands another big takedown and moves to full mount. Huge elbows now from Weili. Jedrzejczyk attempts to scramble but eats some more heavy blows. She eventually gets back up to her feet. Joanna with a right hand. She lands another. That was a big shot. Zhang shoots in and scores another takedown. The horn sounds to end round one.

Round two begins and Zhang catches Joanna Jedrzejczyk with a right hand. A side kick lands for Zhang and then another. A left hook by Joanna scores, but Zhang comes back with a flurry into a body kick. Weili with a pair of hard kicks to the body. Joanna fires back with a pair of crisp jabs. These two are just going at it… Again! Weili Zhang with a spinning back fist and Joanna is down and out. WOW!

Wow… I love both these fighters, hard to see Joanna go out like that.. gg’s.

Weili is the true champion tho. #UFC275 pic.twitter.com/7bbqh5w1os

Who would you like to see Zhang fight next following her KO victory over Joanna this evening in Singapore? Share your thoughts in the comment section PENN Nation!