The Octagon returned to Singapore for tonight’s UFC 275 event, a twelve-bout fight card headlined by Glover Teixeira vs. Jiri Procházka.

The highly anticipated light heavyweight title fight resulted in what many fans and analysts are calling the “fight of the year”. Teixeira and Procházka went to absolute war for the better part of twenty-five minutes tonight at Singapore Indoor Stadium. Glover Teixeira found most of his success on the ground but also rocked Jiri Prochazka on multiple occasions in the standup. Not to be outdone, Jiri also landed a number of hard combinations and knees on the Brazilian veteran. After four rounds of action it appeared that Glover Teixeira was just five minutes away from hearing “and STILL”. However, despite having dominant positions in the final five minutes, Teixeira eventually gave up his back and Jiri forced him to tap with a choke.

The co-main event of UFC 275 featured a women’s flyweight title fight as Valentina Shevchenko took on challenger Taila Santos. The bout proved to be a tightly contested twenty-five minute affair. Valentina Shevchenko definitely had the edge in the striking, but Taila Santos was able to take the fight to the floor with relative ease in the opening three rounds. However, ‘The Bullet’ would battle back from the early adversity and end up having her way in rounds four and five. Still, after five rounds of back and forth action, the fight appeared to be a coin flip. In the end two of the three judges saw the fight in favor of ‘The Bullet’.

Following the conclusion of tonight’s event, UFC officials announced at the post-fight press conference that seven fighters would be taking home performance bonuses. 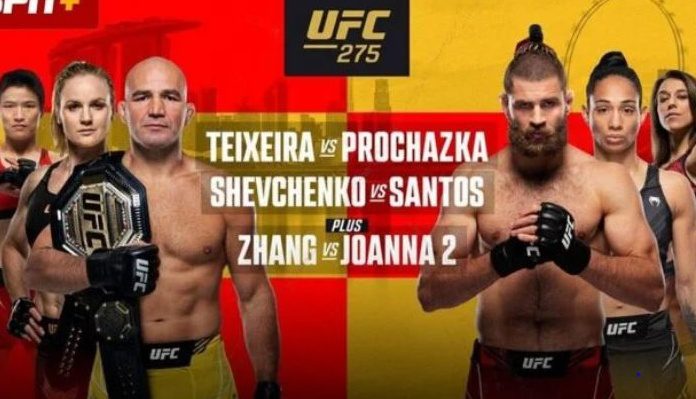 Fight of the night: Main event fighters Glover Teixeira and Jiri Prochazka earned ‘fight of the night’ honors for their thrilling war in tonight’s UFC 275 headliner. Prochazka won the bout by scoring a last second submission in the fifth and final round.

Performance of the night: Weili Zhang pocketed an extra $50k for her stunning spinning back fist knockout of Joanna Jędrzejczyk. The Chinese standout landed the spectacular strike in the second round of their strawweight contest.

Performance of the night: Jake Matthews earned an extra $50k for his sensational second round knockout victory over André Fialho .

Performance of the night: Jack Della Maddalena pocketed an extra $50k for his first round TKO victory over Ramazan Emeev.

Performance of the night: Hayisaer Maheshate earned an extra $50k for his stunning first round knockout victory over Steve Garcia on today’s preliminary fight card.

Performance of the night: Silvana Gómez Juárez earned an extra $50k for her amazing first round knockout win over Liang Na on today’s early prelims.

Are you surprised by any of the performance bonuses handed out by Dana White and company following the conclusion of today’s UFC 275event?

This article appeared first on BJPENN.COM
Previous articlePros react after Joanna Jędrzejczyk announces her retirement from MMA
Next articleJoanna Jedrzejczyk opens up on her decision to retire from mixed martial arts following UFC 275
© Newspaper WordPress Theme by TagDiv