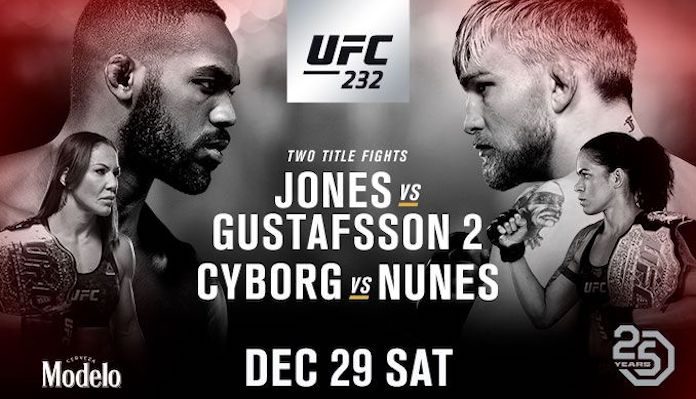 On Saturday night, the UFC touches down in the Los Angeles area — not Las Vegas, as originally planned — with the stacked UFC 232 card.

The card also features a women’s featherweight title super fight, as divisional queen Cris Cyborg looks to defend her title against reigning women’s bantamweight champion Amanda Nunes in one of the biggest fights in the history of women’s MMA.

Here is a full rundown of the UFC 232 results, with highlights where possible (refresh for updates).

How'd you score it? #UFC232 pic.twitter.com/fHtd3REAWJ

They're throwing heat here in round 1! #UFC232 pic.twitter.com/zfEQsx6ceC

The first man to EVER submit BJ Penn.

ONE shot! @UriahHallMMA closes the show in the 3rd with a beautiful counter right hand! What a comeback win! #UFC232 pic.twitter.com/LY1gt8zUA6

Done in 1️⃣!@Montello135 rocks Kelleher with an elbow, then submits him with the D'Arce in the first round! Wow! #UFC232 pic.twitter.com/2HRf4oK5dD