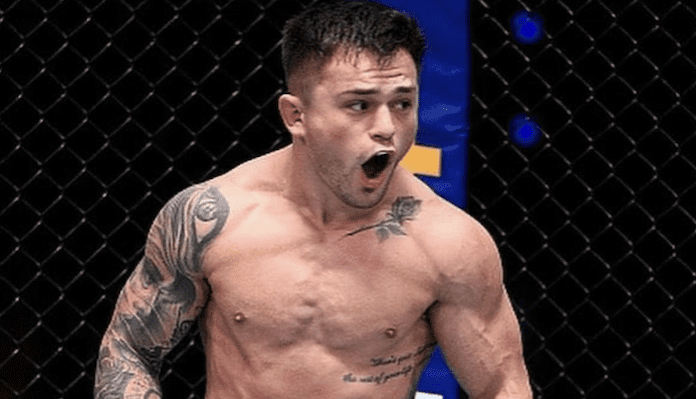 UFC featherweight TJ Laramie shared graphic images of his thigh infection after announcing UFC 268 withdrawal due to an MRSA diagnosis.

Laramie was scheduled to fight Melsik Baghdasaryan on the UFC 268 preliminary card on November 6 at Madison Square Garden in New York City, New York, in what would have been a battle between featherweight prospects on the rise. Unfortunately for Laramie, the fight will no longer take place because he has been diagnosed with MRSA (Methicillin-resistant Staphylococcu) and he will no longer be able to fight as scheduled next month.

Taking to his social media to share an update with his fans, Laramie shared the sad news that he is out of the fight at UFC 268 due to being diagnosed with MRSA. On his Facebook, Laramie shared several graphic photos of his leg.

I’m out of my fight November 6th. Had an abscess cut out of my inner thigh area on Tuesday and also started developing them on my face. At first what I thought was an ingrown hair quickly spread and I started feeling some flu like symptoms and pain in the area, which lead me to the Urgent care and then to the ER. Doctors say it is MRSA. After being on the wrong antibiotics at first I’m now on the correct antibiotics and getting the wound taken care of. Obviously I’m extremely disappointed to not be fighting especially missing the opportunity to be on what is going to be the card of the year. It’s really terrible timing. Luckily the recovery time shouldn’t be long at all and I can get right back to work for the next opportunity.

We here at BJPenn.com wish TJ Laramie the best in his recovery and hope to see him back into the Octagon sometime in 2022.