Song Yadong believes he may earn a title shot with a finish of Cory Sandhagen: “I think this is just the beginning”

The 24-year-old has been out of action since his fight with Marlon Moraes in March. In that outing, the Chinese fighter scored a first-round knockout over the Brazilian. The victory was his third in a row and the most important win of his career to date.

The bantamweight contender is set to make his return this weekend against Cory Sandhagen. The duo will headline UFC Vegas 60, in the first main event of Yadong’s career thus far. ‘The Sandman’ has dropped two straight to T.J. Dillashaw and Petr Yan.

The bout comes at a pivotal time in the 135-pound division. The champion Aljamain Sterling is set to make another title defense next month against T.J. Dillashaw. On the undercard of UFC 280, Petr Yan is expected to face Sean O’Malley in a possible title eliminator.

However, Song Yadong believes that he, not ‘No Mercy’, or ‘Sugar’, could fight for gold next. The 24-year-old discussed getting a title shot at media day for UFC Vegas 60 earlier this week. There, Yadong stated that he believes with a finish, he could earn a crack at gold.

Beyond that, the Team Alpha Male product also praised his opponent Cory Sandhagen. Yadong stated that his opponent on Saturday is still one of the best at bantamweight, despite his current losing streak. 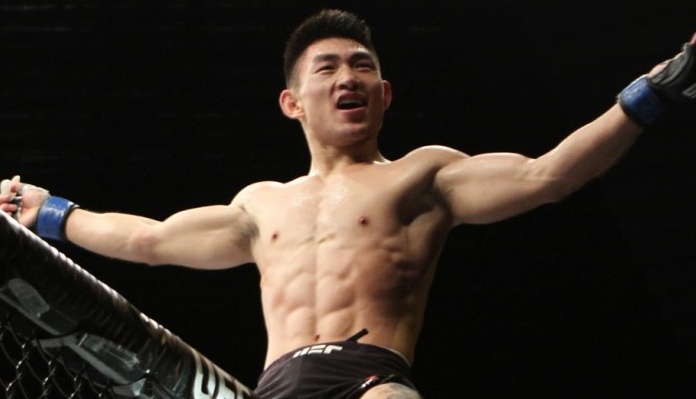 “I think if I finish Cory, I think I got the title fight,” Yadong said at UFC media day earlier this week. “If not, one more. Just one more… He [has] lost two fights in a row, but he’s still dangerous. He’s lost to top fighters. He’s still good.” (h/t MMAJunkie)

He continued, “…I’m still young. I think this is just the beginning. I will go hard.”

What do you think about Song Yadong’s comments? Do you want to see him get a title shot? Sound off in the comment section below!