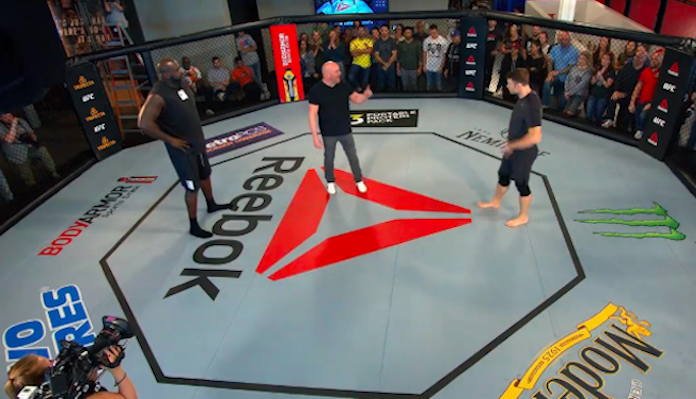 Basketball legend Shaquille O’Neal reveals he had one major concern prior to his grappling match with UFC Hall of Famer Forrest Griffin.

The multiple-time NBA champion, Shaq, squared off with Griffin at the UFC Performance Center in Las Vegas.

O’Neal opened up about his experience grappling with the former UFC light heavyweight champion in a recent interview with For The Win (as transcribed by MMAJUNKIE).

“I was only worried about not getting submitted,” Shaquille O’Neal said.“I’ve been doing it (MMA) but not on the level he has so I just had to stay safe and play it safe. But he was a strong fella and he said the same thing about me. I’m gonna blow my head up pretty high for not getting submitted because when you cross over into somebody’s sport talking all that trash you better be able to back it up.”

Despite being locked in the octagon with a UFC legend, Shaquille O’Neal claims he was not the least bit nervous.

Former UFC women’s strawweight title challenger Claudia Gadelha also made an appearance in the now infamous video. The Brazilian standout proceeded to jump into the cage and choke out Shaquille O’Neal just seconds after his match with Forrest Griffin had ended.

“I was supposed to wrestler her next but she saw me wrestle with Forrest and she realized she couldn’t beat me. Because I told her, I said, ‘Listen, little young lady, if you can make me tap out I’ll give you $10,000 right now. So then she came in in the back and got me when I wasn’t looking.”

While Shaquille O’Neal has trained mixed martial arts for many years now, the former NBA MVP admits fans would most likely see him in the WWE before any professional fight organization.

“Probably not that world, probably the WWE world,” he said. “(MMA) is like real combat and it’s ok to do every now and then but twice a year, or three times a year – I like to fight, but I don’t like to fight that much.”