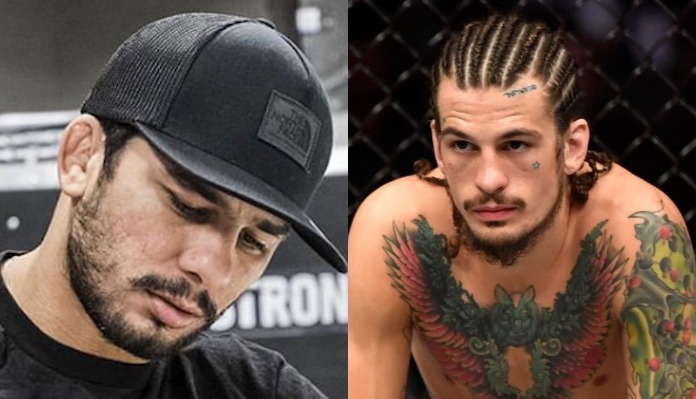 UFC bantamweight Sean O’Malley claims he knocked out flyweight contender Alexandre Pantoja in a sparring session “back in the day.”

O’Malley made this comment during a recent episode of his podcast. See what he had to say below.

“I knocked out Pantoja in the sparring days back at the old Lab,” O’Malley boasted. “Henry Cejudo [was there], yelling at me [saying] ‘pull your punches!’ I’m 3-0 as a pro, he’s making his UFC debut, in shape, in camp […] finished him.”

Brazil’s Pantoja, who currently holds the No. 5 spot in the UFC flyweight rankings, is slated to return to action at UFC Vegas 18 this weekend, where he will welcome former RIZIN Fighting Federation bantamweight champion Manel Kape to the Octagon. The fight with Kape will mark his opportunity to rebound from a decision loss to Askar Askarov.

O’Malley, on the other hand, has not fought since UFC 252 in August, when he was chopped down and stopped by Marlon “Chito” Vera. While that loss officially marked the first setback of his career, he’s been adamant that he’s a better fighter than his foil.

“Let’s look at his career in five years, let’s look at mine,” O’Malley said after the fight. “I’m going to be f*cking world champion, he’s going to be a f*cking journeyman. That’s just what his style is. He wins some, he loses some. He’s slow, but he’s gritty, so he’s going to be able to finish some people after they beat him up for a while. The way his pace was, super slow like that, and I was exploding into shots, I wasn’t gonna get tired and I was just gonna beat his a*s.”

Whatever the case, O’Malley will soon have the chance to put the loss behind him, as he’s slated to fight Brazilian knockout artist Thomas Almeida at UFC 260.

What do you think of this story from Sean O’Malley?