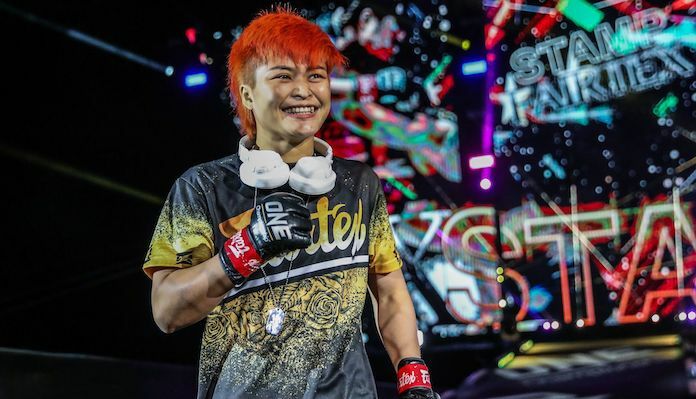 Stamp Fairtex has issued a statement after her head-scratching submission loss to Alyona Rassohyna at ONE: Unbreakable III on Friday.

For most of this fight, Stamp looked to be in the driver sear, out-striking Rassohyna by decision as expected, but also controlling the majority of the fight’s grappling exchanges, flaunting some major improvements to her MMA arsenal in the process. In the waning moments of the fight, however, the Thai striker dove into a guillotine choke, and with just seconds left on the clock, she appeared to tap.

Immediately after her apparent tap, however, Stamp was celebrating as though she would win a decision, which gave cage-side commentators and many viewers the impression that she didn’t mean to tap, and that she believed the fight was over.

Speaking in a post to her official Instagram account post-fight, Stamp confirmed those suspicions, claiming that she didn’t mean to tap. That being said, she classily congratulated her opponent and accepted the referee’s stoppage.

“This fight I trained very hard with passion,” Stamp, who is learning English, wrote. “It’s my first fight of the year. I would like to make it great. I got caught in a guillotine, but I still can breath. I tried to reach with my hand to push my opponent’s face but it got stuck on her elbow. The referee thought I tapped. Anyway I have to say I fought with my full heart and did my best. I would like to say thank you to everyone who support me. Sorry that I make you disappointed. I would like to ask for a rematch, to make it all clear. Congratulations to my opponent, I respect the referee’s decision.”

What are your thoughts on this explanation from Stamp Fairtex?